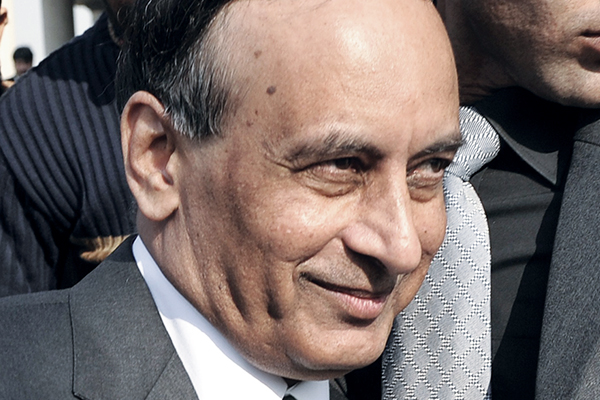 Husain Haqqani, Islamabad’s former ambassador to Washington, is making waves with his latest book, Magnificent Delusions, which speaks hard truths about the arrant alliance between Pakistan and the United States. In 2011, Haqqani was forced to resign as envoy under Army pressure, and the Iftikhar Chaudhry-led Supreme Court, champion of the hypernationalist narrative, zealously moved against him and his wife, Farahnaz Ispahani. The court declared open season on Haqqani: it dubbed him a “traitor,” placing his life at risk. And Ispahani, one of the most widely-lauded voices for human rights in Pakistan’s previous National Assembly, was ousted from the legislature. Faced with injustice at home, Haqqani returned to academia abroad. He teaches international relations at Boston University and is a director for South and Central Asia at the Hudson Institute, a think tank in Washington, D.C. We spoke with Haqqani over email recently about his book and the delusions that continue to impair Pakistan’s relationship with the U.S. Excerpts:

You have been a consistent advocate of resetting Pakistan-America relations on the basis of pragmatism. What exactly does this entail?

For 66 years, Pakistan has sought close ties with the U.S. with the sole purpose of offsetting India’s size and military advantage. This has been a security relationship. But no nation can become a regional power while also being dependent on assistance from other countries. A better option for Pakistan would be to normalize relations with India and Afghanistan and then have a broader, nonsecurity relationship with the United States. Pakistanis resent the U.S. partly because we have been dependent on it. The United States had not been constant in its relations with Pakistan, but it was also wrong on Pakistan’s part to expect constancy. I have studied several models of partnership with the United States and wondered why most other U.S. allies since World War II have prospered while Pakistan has not. The answer came down to our unwillingness to have an honest relationship. South Korea and Taiwan aligned their security policies and perceptions with the Americans. Pakistan refused to accept U.S. advice, especially where its regional view was questioned. My vision, encouraged by [former prime minister] Benazir Bhutto, was for a strategic rather than tactical relationship. It would not be based on asking for military aid in return for providing some services to the Americans in their concerns. We need to build a self-confident Pakistan, free of the burdens of past blunders, especially jihadist misadventures. American assistance should be directed toward standing on our own feet. We need a relationship involving education, tourism, investment, and trade—like other countries have—not one that is all about seeking military equipment and aid in private and abusing America in public.

But despite the mutual misgivings, Pakistan and the U.S. remain disenchanted allies. Does the relationship lose relevance after NATO troops pull out from Afghanistan by the end of 2014?

I do not think Pakistan and the U.S. are allies. We just pretend to be allies. Each round of close engagement has been followed by disenchantment on both sides. This time I think the mistrust and disenchantment runs much deeper than before. A long-term relationship post-2014 is possible. But it would require a fundamental reorientation of Pakistani policies. Unlike the 1950s, when Afghanistan and India refused to be U.S. allies leaving Pakistan as the only partner in the region, this time the Americans have alternatives whereas Pakistan might not.

Can Pakistan and the U.S. avoid a bitter, perhaps inevitable, falling-out?

Both countries need to get past their one-sided narratives. Both have made mistakes, and both have raised expectations of the other that have not been fulfilled. Americans must understand that aid does not buy a people’s friendship. Pakistan must get out of the business of jihad and understand that spinning a narrative of victimhood at home is no way to ensure respect abroad. Above all, both countries must evolve a pragmatic relationship based on realistic expectations.

What steps can Pakistan take to right past wrongs?

Pakistan’s foreign policy is based on a psyche of insecurity. After acquiring nuclear weapons we should have felt secure. Instead, we act like the man who keeps buying guns to protect himself and his family and then stays up all night fearing that someone will steal his guns. Just as staying up all night would likely give high blood pressure to our imaginary gun-buying man, Pakistan is suffering internally from its insecurity-driven policies. Former Chinese president Jiang Zemin had suggested just this in his address to Pakistan’s Parliament in December 1996 that Pakistan should shelve issues that cannot be resolved for the time being. We should apply that advice and normalize relations with Afghanistan and India. Just as China did not give up its rights over Taiwan, Pakistan need not give up its claim on Kashmir. But it should start trade with India, which would enhance Pakistan’s economic growth. It would also ensure peace, which is a precondition for development. In the case of Afghanistan, Pakistan should befriend the government in Kabul instead of trying to impose one of its own choosing. Pakistan should put all terrorist groups out of action, come clean on its nuclear program, and develop a comprehensive program of disarmament, demobilization, and reintegration for the jihadists. Denial of the terrorists’ presence on Pakistani soil is no longer an option. We must become a trading nation instead of being a “warrior” state.

Is the warrior-state mentality, derived from Pakistan’s creation in the name of Islam, something that can be so easily refashioned?

Pakistan may have needed an Islamo-nationalist raison d’être for its creation; it does not need one for its evolution into a functional state. Most nations and countries have evolved through a process of history, not through propagated ideology. Some 95 percent of Pakistan’s population was born after 1947. We are Pakistanis because we were born Pakistani; we need to stop insisting on being an ideological nation. We just need to figure out how to make the nation we were born into secure and prosperous. We need to debate policies, not ideology. As long as we keep feeling the need to ideologically justify our existence, we will be psychologically insecure. Changing the ideological paradigm is the key to changing things for the better.

What did you discover about Pakistan-America relations while ambassador, and what’s your advice to the ambassador-designate?

Magnificent Delusions, with its 32 pages of endnotes, is my answer to the first part of your question. My advice to the incoming ambassador is to make sure he is seen by his interlocutors as credible. Playing to the gallery back home does not enhance an ambassador’s ability to influence events in his host country, particularly a place like the United States. I may have been burnt at the stake by the [national-security] establishment at home, but I still have my integrity internationally. That enables me to speak for my country even without any office.

What do you say to detractors who allege you have been “unkind” to Pakistan?

Just because I refuse to accept myths circulated for public consumption throughout our history does not mean I am unkind to Pakistan. Vibrant nations encourage self-criticism and adjust policies based on different ideas. Honest debate is not possible without facing facts. Don’t forget, on Dec. 17, 1971, a day after thousands of our troops had surrendered at Dhaka, the headline in Dawn was “Victory on All Fronts.” If that was being kind to Pakistan, it did not change the fact that we had lost half our country’s territory and more than half its population. I would rather be accused of being unkind while marshaling facts than being guilty of deception that results in an irreversible loss to my country.

Sickness of the State

“Don’t forget, on Dec. 17, 1971, a day after thousands of our troops had surrendered at Dhaka, the headline in Dawn was “Victory on All Fronts.” If that was being kind to Pakistan, it did not change the fact that we had lost half our country’s territory and more than half its population.” Magnificently sums up how many among us are still steeped in “Magnificent Delusions!”

@shoaib you nailed it my friend. Magnificently slapped right back at them. Truth prevails but in current times it seems the highest bidder makes the front page.

See what Hussain Haqqani (A Notorious traitor) has to say for Pakistan.

An investigation by Ali Gharib on Foreign Policy magazine’s Middle East Channel reveals that Pakistani ambassador Husain Haqqani hosted a fundraiser for the Foundation for Defense of Democracies, an Israel lobby think tank campaigning for an attack on Iran.

Illogical stance mentioned by the Hussain Haqqani over Pakistan’s foreign policy insecurity. Pakistan has to defend their aggressive neighbour with increasing conventional arms and guns, not only this to defend terrorist activities going beyond the Western border of Pakistan. Pakistan cannot simply rely on nuclear weapons with no guns to defend, its policies are more sensible than Hussain Haqqani. Pakistan’s stance over Kashmir and other territorial disputes should not be changed; in short Hussain Haqqani is suffering from Hallucinations and delusions and should visit any good psychiatrist.

The history will give the verdict on who were or are the traitors. Husain was martyred by evil forces. History has proved Imam Husain was right, and savior of the religion and humanity. It was greatest martrdom in the history oh man kind. Husain Haqqani was martyred by a zealous Chief Justice, who had nothing else except to appoint commissions. What about his son Arslan . Who took byibe from a real estate developer, whose cases were pending before the court.

Husain Haqqani has spoken the truth about the foreign policy matters. We have had never an independent foreign policy. The establishment controls the foreign relations. We have been following dictates of other powers , not setting a national agenda. The Civil administration has never asserted itself over these vitalissues, and nationalinterest has never been be watched by our so- called rulers.

We have suffered at the hands of the dictatorial regimes. We have four military rulers to deal with, who brought ruins to Pakistan. They were one call away to surrenderto the power Presently we are dealingwith a recalcitrnt dictator, who is up for treason trial. Everyone can watch and learn what is happening ? How a real tritor is treated ? What security and detauled safety apparatus is provided to hom.
So far he has denied to appear before the court on one pretext or the other. He is given protcol even after being charged with treason.

I gope we are able to write the new chapter of the history by punishing the real traitors. We should not politically victimize persons like Haqqani and his wonderful Wife Farah Naz Isphani.