Home Latest News ‘They Support Me’ 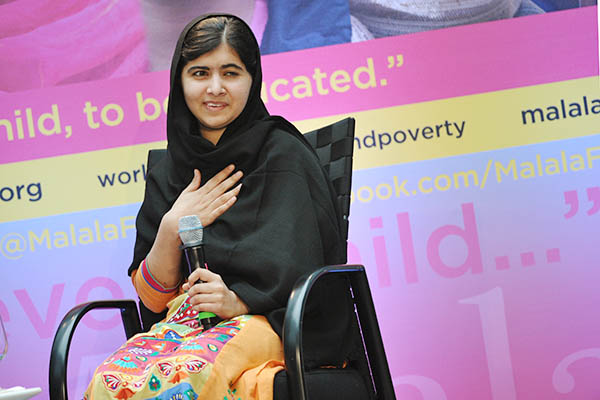 Malala Yousafzai denies that she is a Western ‘puppet,’ tells BBC she is proud to be a Pakistani.

Malala Yousafzai hit back at claims that she has become a figure of the West, insisting she was proud to be a Pakistani.

The 16-year-old, who was shot by the Taliban for championing girls’ right to an education, claimed she retained the support of people in her homeland, and reiterated her desire to enter Pakistani politics.

The Taliban shot Yousafzai on Oct. 9 last year for speaking out against the militants. She was flown for specialist care in Britain, where she has continued her education, and has been feted and honored in the West.

On Thursday, she won the European Union’s prestigious Sakharov human rights prize, while U.S. President Barack Obama welcomed her to the White House on Friday.

Asked in a BBC television interview broadcast Sunday about some people in Pakistan thinking she was a “figure of the West” and “a Westerner now,” she said: “My father says that education is neither Eastern or Western. Education is education: it’s the right of everyone. The thing is that the people of Pakistan have supported me. They don’t think of me as Western. I am a daughter of Pakistan and I am proud that I am a Pakistani. On the day when I was shot, and on the next day, people raised the banners of ‘I am Malala.’ They did not say ‘I am Taliban.’ They support me and they are encouraging me to move forward and to continue my campaign for girls’ education.”

She highlighted the problem of education in the midst of the Syrian conflict.

“We want to help every child in every country that we can,” she said. “We will start from Pakistan and Afghanistan and Syria now, especially because they are suffering the most and they are on the top that need our help. Later on in my life I want to do politics and I want to become a leader and to bring the change in Pakistan. I want to be a politician in Pakistan because I don’t want to be a politician in a country which is already developed.”