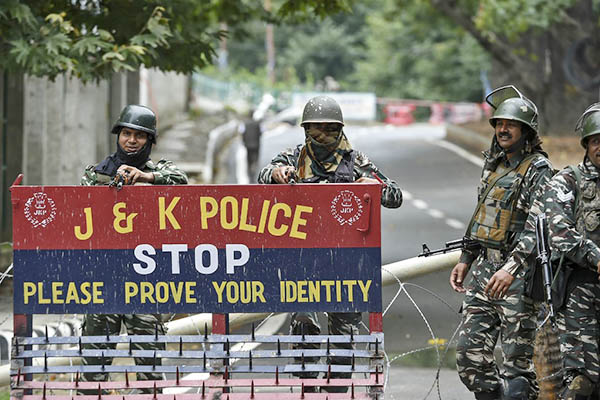 Government sources claim at least 4,000 people in jail under law that allows authorities to imprison people for up to two years without charge or trial

Thousands of people have been detained in India-Occupied Kashmir over fears of unrest after New Delhi stripped the region of its autonomy two weeks ago, government sources told AFP.

A magistrate, on condition of anonymity, said at least 4,000 people were arrested and held under the Public Safety Act (PSA), a controversial law that allows authorities to imprison someone for up to two years without charge or trial.

“Most of them were flown out of Kashmir because prisons here have run out of capacity,” the magistrate said, adding that he had used a satellite phone allocated to him to collate the figures from colleagues across the Himalayan territory amid a communications blackout and lockdown imposed by authorities.

The revelations came as the family of a timber trader alleged he died after suffocating from tear gas fired by security forces. “They [security forces] first damaged the property and when he went out to check, they fired tear gas shells and because of the smoke, he suffocated and died,” said Muddasir Ahmed, the nephew of 62-year-old Sidiq Khan, on Sunday during his wake.

The India-Occupied Kashmir government did not immediately respond to a request for comment. One youth had died in the early days of the lockdown after he jumped into a river while being chased by police.

Authorities have repeatedly declined to provide a tally of how many people have been taken into custody, apart from confirming more than 100 local politicians, activists and academics were detained in the first few days after the state was stripped of its semi-autonomous status. They said the “few preventive detentions” were made to avoid a “breach of the peace” in a region that has fought an armed rebellion against Indian rule for three decades. Those detained include high-profile former chief ministers Mehbooba Mufti and Omar Abdullah.

Jammu and Kashmir government spokesman Rohit Kansal said previously there was “no centralized figure” for the total number of people detained. But AFP spoke to numerous government officials in India-Occupied Kashmir’s main city of Srinagar, including police and security personnel, who confirmed the sweeping arrests.

A police official who asked to remain anonymous said “around 6,000 people were medically examined at a couple of places in Srinagar after they were detained.” He added: “They are first sent to the central jail in Srinagar and later flown out of here in military aircraft.”

Residents living around the airport in Srinagar, where the Indian Air Force controls air traffic, say military aircraft land and take off every night. Another security official said “thousands are jailed” but that the figure did not include other residents whose detentions at police stations had not been recorded.

Families of those detained were reluctant to speak to AFP, fearing they would get into trouble with authorities. A resident who asked not to be named said a shopkeeper was arrested despite not taking part in protests, with a police officer telling him he was detained “because he talks a lot.”

Authorities on Sunday earlier reinstated the heavy restrictions even though they had earlier flagged easing them, after eight people were injured during protests.

The Press Trust of India news agency cited unnamed officials saying there had been clashes in a dozen locations around Srinagar on Saturday. Authorities have previously denied or played down reports of any violence and stressed that most of the Muslim-majority Kashmir Valley has been peaceful.

State government spokesman Kansal told reporters late Saturday that eight people had been injured in the clashes but did not provide further details.

A senior government official told AFP earlier on Sunday that more telephone exchanges would return to normal operations “by the evening” and schools in some areas would reopen on Monday. New Delhi’s shock decision has sparked public anger and frustration and there have been several rallies in Srinagar attracting thousands of demonstrators.