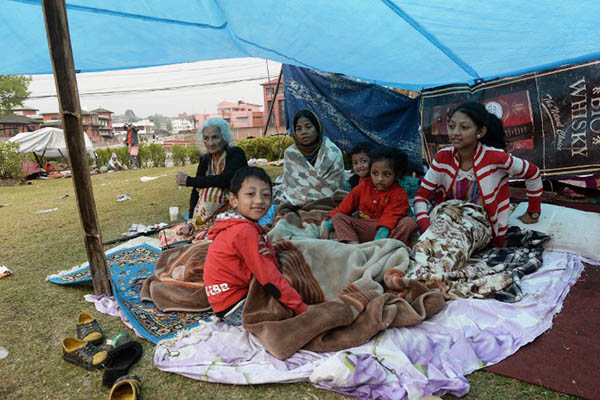 Death toll of deadliest quake to hit Himalayan nation in 80 years had climbed to over 3,600 people.

Tens of thousands of frightened Nepalese huddled in tents desperate for help Monday, two days after a quake killed more than 3,600 people, as international rescue teams with sniffer dogs raced to find survivors buried in the rubble.

Teams equipped with heavy cutting gear and relief supplies were landing round the clock at the country’s only international airport on the outskirts of Kathmandu, which has been devastated by Saturday’s 7.8 magnitude quake.

Officials say more than 3,600 people are now known to have died, including 3,218 in Nepal—making it the quake-prone Himalayan nation’s deadliest disaster in more than 80 years.

Families, the sick and elderly packed into parks and other open spaces in Kathmandu after losing their houses, with others too terrified of aftershocks to return home. “This is a nightmare, why don’t these aftershocks stop?” asked 70-year-old Sanu Ranjitkar, clutching her dog and with an oxygen mask strapped to her face, sitting under a tarpaulin.

With just sheets of plastic to protect them from the cold and rain, many said they were desperate for aid and information on what to do next. “There is just too much fear and confusion,” said Bijay Sreshth, as he tried to listen to a radio in the hope of hearing a message from the government. “We don’t know what to do next or for how much longer we are here,” said Sreshth, who fled to a park with his three children, wife and mother when the quake hit.

A government official said tons of clean water and other essential supplies were needed for the survivors as well as stepped up search and rescue efforts outside the capital. “We need more helicopters for our rescue operations in rural areas,” said home minister spokesman Laxmi Prasad Dhakal. “We also need supplies of essential goods such as food and clean water to provide relief for survivors,” he said.

Saturday’s earthquake also killed around 90 people in neighboring countries, including at least 67 in India and 20 in China. It triggered an avalanche on Mount Everest, the world’s highest mountain, which buried part of base camp and killed at least 18 people. And aftershocks set off fresh avalanches on the mountain Sunday even as helicopters evacuated some of those worst injured the day before.

Hundreds of mountaineers had gathered at Everest at the start of the annual climbing season, and the real scale of the disaster there has been impossible to evaluate with communications all but cut off. “We have deployed three helicopters today to bring climbers down from camp one and two. They are safe but we need to bring them down because part of the route is damaged,” tourism department head Tulsi Gautam said. “It is possible that climbing might not continue this year. However, there has been no official decision.”

Reconstruction efforts in impoverished Nepal could cost than $5 billion, or around 20 percent of the country’s GDP, according to Rajiv Biswas, Asia Pacific chief economist at business research firm IHS. Much of the historic center of the capital Kathmandu is in ruins. The situation for survivors has been exacerbated by power cuts and the country’s cell phone network is at breaking point.

“I don’t know why the gods want us to suffer like this,” said 34-year-old shopkeeper Rabi Shrestha as he camped out on the roadside.

Announcing the latest death toll in Nepal, a top disaster official said that emergency crews would also step up their efforts to rescue those trapped in the rubble of high-rise buildings, which pancaked on Saturday. “Our efforts today will also be focused on finding survivors in areas where big buildings have collapsed,” said Rameshwor Dangal, who heads the home ministry’s national disaster management division.

The historic nine-storey Dharahara tower, a major tourist attraction, was among the buildings brought down in Kathmandu Saturday. Police said around 150 people were thought to have been in the tower at the time of the disaster, based on ticket sales.

“At least 30 dead bodies have been pulled out. We don’t have a number on the rescued but over 20 injured were helped out,” said local police official Bishwa Raj Pokharel. “We haven’t finished our work there, rescue work is still continuing.”

Home ministry spokesman Dhakal said the government was also stepping up efforts to help remote areas closer to the epicenter of the quake.

The Nepalese rescuers were being joined by hundreds of foreign aid workers from countries such as China, India and the United States. Around 70 U.S. aid workers, along with rescue dogs, headed to Nepal aboard a military transport plane, which flew from Dover Air Force Base in Delaware.

India meanwhile flew in 13 military transport planes loaded with tons of food, blankets and other aid.

Hospitals have been overwhelmed by the disaster, with morgues overflowing and medics having to work through the night to cope with an endless stream of victims suffering trauma or multiple fractures. Some surgeons have been operating from makeshift theaters set up in parking lots, with the aftershocks making patients too scared to stay inside.

Around a dozen dead bodies had to be placed on the floor at Bir Hospital, the city’s oldest, while stricken relatives stood vigil, trying to swat away the flies.

Nepal and the rest of the Himalayas, where the Indian and Eurasia tectonic plates collide, are particularly prone to earthquakes. An 6.8 magnitude quake hit eastern Nepal in August 1988 killing 721 people, and a magnitude 8.1 quake killed 10,700 people in Nepal and India in 1934.

India Must Stay Away from Afghanistan: Chaudhry Fawad