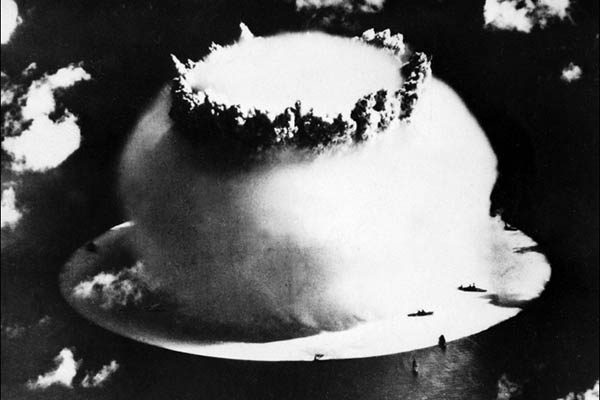 A top U.N. official sounded the alarm on Monday over a new, looming arms race and warned that the risk that devastating nuclear weapons could be used was on the rise.

“The threat of the use, intentional or otherwise, of nuclear weapons is growing,” the U.N.’s representative for disarmament affairs, Izumi Nakamitsu, told a preliminary review meeting of the Nuclear Non-Proliferation Treaty (NPT).

The United States, which holds one of the world’s largest nuclear arsenals, also warned the conference that the prospects for progress on disarmament was currently “bleak.”

The NPT, negotiated at the height of the Cold War nearly a half century ago, seeks to prevent the spread of atomic weapons while putting the onus on nuclear states to reduce their stockpiles.

Speaking at the opening of the Geneva meeting, Nakamitsu warned that “the world today faces similar challenges to the context that gave birth to the NPT.”

“Rhetoric about the necessity and utility of nuclear weapons is on the rise,” she said, stressing that “modernization programs by nuclear-weapons states are leading to what many see as a new, qualitative arms race.”

The NPT treaty, which counts 191 member states, faces a comprehensive review every five years, with preparatory committees each year in between. The next full review of the treaty is scheduled for 2020, 50 years after the NPT first took effect.

This year’s meeting comes after North Korea, which pulled out of the treaty in 2003, declared a moratorium on nuclear and long-range missile tests and said it would dismantle its nuclear test site. Many speakers at the Geneva meeting welcomed the announcement, but they also voiced caution.

European Union representative Jacek Bylica stressed for instance the need to “keep up maximum pressure [on North Korea] until it embarks on a credible path towards complete, verifiable and irreversible denuclearization.”

Christopher Ford, U.S. Assistant Secretary for International Security and Nonproliferation, insisted that Pyongyang had “yet to return to compliance” with the NPT.

U.S. President Donald Trump has threatened to tear up the 2015 nuclear deal that lifted sanctions on Iran in exchange for curbs to its atomic program unless new restrictions are imposed on its missile program and other areas by May 12.

A number of speakers on Monday meanwhile voiced their support for the Iran deal. Nakamitsu stressed the U.N.’s backing of the agreement as “the best way to ensure the exclusively peaceful nature of Iran’s nuclear program.”

In his speech, Ford also took aim at Moscow, accusing it of violating its “arms control obligations” and decried “the deleterious impact on our collective security” of the use of chemical weapons in Syria.

His comments sparked an angry back-and-forth on the floor with Syria’s main backer, with Russian representative Vladimir Yermakov slamming the U.S. for trying to divert attention from nuclear non-proliferation.

Five of the world’s nuclear-armed states—Britain, China, France, Russia, and the United States—are parties to the NPT. But India and Pakistan, as well as Israel, which has never acknowledged it has nuclear weapons, have never signed the treaty.

Despite their treaty obligations, observers say that all nuclear-armed NPT members are engaged in modernizing their arsenals and making nuclear weapons a more central part of their defense strategies.

President Donald Trump’s administration has for instance recently decided to upgrade the U.S. nuclear weapons arsenal and to complement massive “strategic” bombs with smaller “tactical” weapons, in a move critics say would make them easier to use. During Monday’s meeting, China’s representative Fu Cong accused Washington of using “untenable excuses to intensify its nuclear capability and nuclear deterrence policy and lower the threshold for using nuclear weapons.”