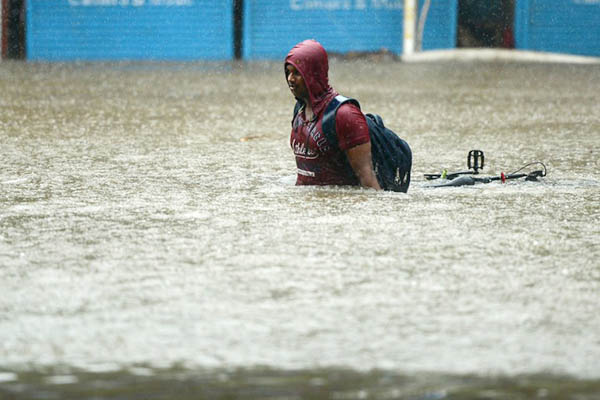 Two houses collapsed in Mumbai’s suburbs late Tuesday, killing a 40-year-old and two toddlers, a local police official told AFP. “A house on a higher level collapsed on the one below which trapped the residents. Rescue work is going on to clear the debris,” he said.

Navy helicopters have been kept on standby with flood rescue teams and divers also ready for deployment, the Press Trust of India news agency quoted a navy spokesman as saying.

Some people were forced to abandon their submerged cars to walk home through flooded streets. Hundreds of others were stranded at railway stations, waiting for rescue workers to help them go back home amid warnings of further heavy rain spells Wednesday.

“I had to stay the night at my office since train services were cancelled. My son also could not get home because of the heavy flooding,” said Vijaya Das, who works for the Reserve Bank of India.

Floods have killed more than 1,000 people in India, Nepal and Bangladesh in recent weeks and forced millions from their homes in the region’s worst monsoon disaster in recent years.