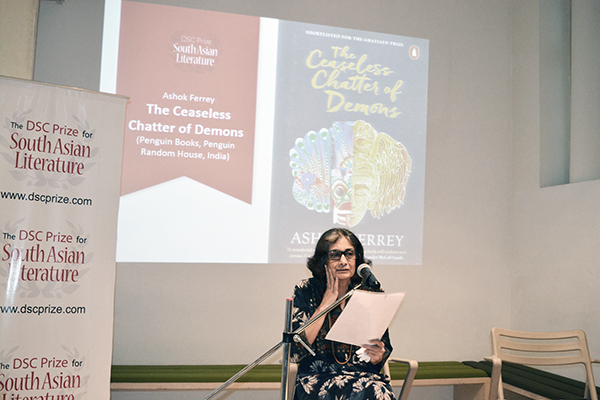 Three Pakistani authors have made the longlist for the 2017 DSC Prize for South Asian Literature.

Unveiled in New Delhi on Aug. 10, the works up for this year’s prize includes The Party Worker by Omar Shahid Hamid, This Wide Night by Sarvat Hasin, and Those Children by Shahbano Bilgrami.

The longlist also includes works by seven Indian writers, two Sri Lankan writers, and an American writer based in India. The 10 other books on the list are:

The Living by Anjali Joseph
The Parcel by Anosh Irani
The Story of a Brief Marriage by Anuk Arudpragasam
Selection Day by Aravind Adiga
The Ceaseless Chatter of Demons by Ashok Ferrey
South Haven by Hirsh Sawhney
The Association of Small Bombs by Karan Mahajan
The Poison of Love (Translated by Ministhy S.) by K. R. Meera
Pyre (Translated by Aniruddhan Vasudevan) by Perumal Murugan
In the Jungles of the Night by Stephen Alter

The five-member international jury selected these 13 books, from over 60 eligible entries, as best representative of fiction related to South Asia.

“It was a great pleasure to read this year’s submissions, remarkable for their range, energy and generational sweep,” said Menon, who chairs this year’s jury. “We were struck by several exceptional qualities in the novels selected: their inventiveness and creativity, both of subject matter and in literary treatment. We admired the maturity and humanity of the perspective they brought to bear on their characters, and the delicacy of their observations on difficult or troubled situations. We were beguiled by their wit and humor, as well as impressed by the versatility of their skill when dealing with history. And we were reminded that, although the writers’ preoccupations may be universal and their sensibility cosmopolitan, their voices are distinctly South Asian.”

“The novels on the longlist are a must-read as they successfully bring out the nuances and challenges of the ever evolving South Asian life,” said Surina Narula, cofounder of the DSC Prize. “The longlist of 13 novels also includes translations as well as works of authors based in different countries, all of which bring in diverse perspectives and raise relevant issues. Now in its seventh year, the DSC Prize has been successful in bringing the immense talent writing about the South Asian region to a larger global audience.”

The shortlist of five or six books from the 13 will be announced on Sept. 27 at the London School of Economics & Political Science. The winner shall be named at a special ceremony at the Dhaka Literary Festival on Nov. 18. The winner will also receive $25,000 in prize money.