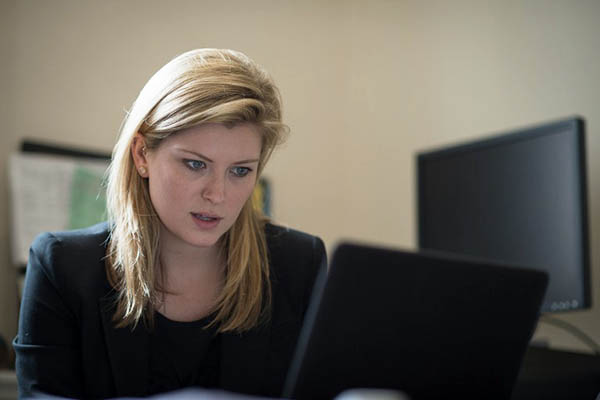 New research uses social media to attempt to figure out why Western women opt to leave their homes for the ‘caliphate.’

In a nondescript office in central London, researcher Melanie Smith stares at her laptop, scrolling down the Twitter feed of a 17-year-old British girl who ran away to join Islamic State militants. “What we’re looking at here is when she announced her husband’s death,” said Smith, pointing to a post from a few months ago that says: “May Allah accept my husband.”

There are also lots of retweets, from screenshots of I.S. propaganda videos to news articles, particularly around the time of the Islamist attack on the French satirical magazine Charlie Hebdo in Paris in January. “We saw her retweeting pictures of the cartoonists who had been killed and also others who were celebrating the attacks,” Smith said.

The account is one of several held by Salma Halane, a schoolgirl from Manchester who ran away to join the I.S. group with her twin sister Zahra in July 2014. The twins are among an estimated 550 Western women that have joined the Islamist militants who have seized swathes of territory across Syria and Iraq.

Smith and her colleague Erin Saltman of the Institute for Strategic Dialogue have profiled 108 of the women from their social media accounts, in a groundbreaking project to understand more about female recruits and their online footprints.

“It’s pretty much my life now, it’s kind of an obsession,” said Smith, a petite blonde who, having just turned 23, is similar in age to many of her subjects. They do not interact with the women, they just watch.

Scrolling through Twitter, Facebook, Ask.fm and tumblr accounts for hours on end can take its toll, however. “You are seeing very disturbing images, everything from beheadings to dead children. It’s not easy,” said Saltman.

Some researchers in this field suffer from post-traumatic stress disorder (PTSD) and they can become targets themselves. “I personally have received a couple of Twitter death threats,” Saltman said.

Smith began working on the database about a year ago, archiving online posts from women who have left their often affluent Western lives behind to become brides of I.S. fighters and populate the new “caliphate.” One of her subjects is just 14. “I feel sympathy for the younger ones,” she said, but this fades as they become more radical. “I don’t feel much pity. But I do take an interest in what would have brought them to that decision.”

The research, undertaken jointly with the International Center for the Study of Radicalization at King’s College London, is necessarily limited, not least because it focuses on English-speaking accounts. A recent U.S. study identified at least 46,000 Twitter accounts linked to supporters of the I.S. group, with three-quarters of them tweeting in Arabic. Information gleaned from social media can also be patchy, but what they have found challenges the notion of naive “jihadi brides,” revealing women who are just as ideologically committed as the men.

While forbidden from fighting, the women use open-access social media to spread Islamist propaganda and, through posts hailing the medical care available or the camaraderie of the “sisterhood,” encourage new recruits. “We know that the lens we’re seeing is the propaganda, not the reality. We read between the lines quite a lot,” said Saltman.

Mentions of miscarriages and the pain of leaving families back home slip between posts glorifying I.S. fighters, while a brief hashtag trend #nobodycaresaboutthewidow suggests some women feel isolated after their husbands die. Negative sentiments are quickly drowned out by positive tweets from the user’s followers, however.

Many of the women use “noms de guerre” and their accounts are frequently shut down for breaching rules on disseminating extremist material. The researchers report users to Twitter or Facebook if postings point to an actual attack, and the police got in touch recently about one of their reports.

But they view censorship as largely counterproductive. “If you take one account down, three appear in their place,” Smith said.

Mostly their subjects are aware they are being monitored—if the researchers are reading, it would be safe to assume that so are the security services. Exchanges that veer into sensitive areas, for example on how to travel to Syria, are referred to private messenger services such as Kik, Surespot, Wickr or WhatsApp. “They are showing such an intimate lens into their life, but it’s also a very self-aware lens,” Saltman said.