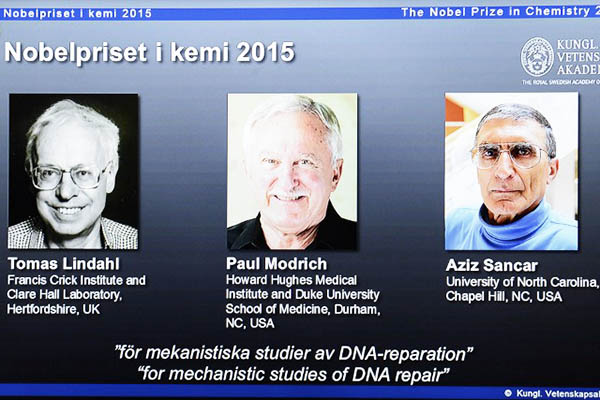 Sweden’s Tomas Lindahl, Paul Modrich of the U.S. and Aziz Sancar, a Turkish-American, won the 2015 Nobel Chemistry Prize on Wednesday for work on how cells repair damaged DNA.

The three opened a dazzling frontier in medicine by unveiling how the body repairs DNA mutations that can cause sickness and contribute to ageing, the Nobel jury said. “Their systematic work has made a decisive contribution to the understanding of how the living cell functions, as well as providing knowledge about the molecular causes of several hereditary diseases and about mechanisms behind both cancer development and ageing,” the panel said.

DNA—deoxyribonucleic acid—is the chemical code for making and sustaining life. When cells divide, molecular machines seek to replicate the code perfectly, but random slipups in their work can cause the daughter cells to die or malfunction. DNA can also be damaged by strong sunlight and other environmental factors. But there is a swarm of proteins—a molecular repair kit—designed to monitor the process. It proofreads the code and repairs damage.

“The basic research carried out by the 2015 Nobel laureates in chemistry has not only deepened our knowledge of how we function, but could also lead to the development of lifesaving treatments,” the Nobel committee said.

The Nobel awards week continues with the announcements for the two most closely-watched prizes: on Thursday the winner of the literature prize will be announced, followed by the peace prize on Friday. The economics prize will wrap up this year’s Nobel season on Monday.

The laureates will receive their prizes at formal ceremonies in Stockholm and Oslo on Dec. 10, the anniversary of the 1896 death of prize creator Alfred Nobel, a Swedish philanthropist and scientist.