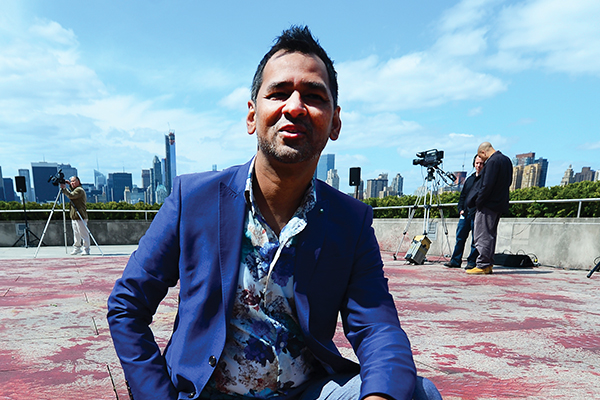 In May, Pakistan’s Imran Qureshi became the first artist to paint directly onto the rooftop of the Metropolitan Museum of Art in New York. His 8,000-square-feet installation, a work in response to the violence in Pakistan and around the world, will remain in place through Nov. 3. Qureshi, who graduated from Lahore’s National College of Arts in 1993 with a major in miniature painting, also teaches at the NCA. He’s got a host of international shows scheduled for the year, including a collection of his works at the Museum of Contemporary Art of Rome in September. We spoke with Qureshi in Lahore recently about international interest in and the global nature of his work. Excerpts:

With your installation on the rooftop of the Met you’ve literally made it to the top of the global art scene. How does that feel?

Success has come very organically, and because it’s all happened so slowly and smoothly I was able to settle into it. If success comes all of a sudden, there’s a chance it might affect the way you think and work.

How did the installation come about?

Sheena Wagstaff, who is the chairperson of the Modern and Contemporary Art Department there, started following my work after the Sharjah Biennale [in 2011]. At that time she was with the Tate Modern. So we had a couple of meetings about my work then—I had no idea she was thinking about a project for me. This was her first project at the Met, and this was the first time I felt a huge level of trust in my work. I was also a bit worried that I shouldn’t disappoint them. But they seem to be happy.

How has the Met exhibit boosted your career?

A lot of museums and institutions seem interested in collecting my work for their permanent collections. Previously I have exhibited at the Whitney and at the Asia Society in New York. I am also Deutsche Bank’s Artist of the Year, so there’s a big exhibition happening in Germany. They’ve made a great publication of my work. I’m also exhibiting at the Italian Pavilion at the Venice Biennale, so quite a few things are happening.

You have said your works are inspired by your surroundings. Does this pose any problem for audiences abroad who may be less familiar with the context of your pieces?

My work is a response to what’s happening in my surroundings. But the effects of something local can now be very global, so people understand the work more and don’t treat it as something completely alien. The political and social circumstances of today’s world have led people to this understanding. What’s interesting is that they relate the work to their own set of circumstances. So my work isn’t really fixed to an area or a region, it’s more about addressing global politics and issues.

Viewing art is, of course, highly subjective. Have there been any surprising reactions to your work?

I won the finale award at the Sharjah Biennale for Blessings upon the Land of My Love. The response was amazing. People were connecting to the work on so many different levels. The Pakistanis in the audience were relating it to the violence in our country, the Arabs to the Arab Spring and Tahrir Square, the Westerners to the World Wars, and the Shia to Karbala. I went up to a Japanese woman, who was crying, and she said the work had reminded her of the tsunami that had just hit Japan. Religion, history, current affairs were all being read into this one work.

Your work also covers a range of sizes and mediums.

Even when I was a student of miniature painting I wasn’t specializing in it, primarily because I loved moving here and there. I thought miniatures too restrictive and disciplined. That discipline, though, holds a certain pleasure and teaches immense patience. I found the contrast between doing loud college theater on one hand and sitting for days working on a one-inch canvas on the other very interesting. Even in the Deutsche Bank show, there are large canvases, there is a big cultural installation, and then there are tiny, traditional miniature paintings. These three parts are happening at the same time. So it’s interesting to see that with one personality there can be different approaches.

Your contemporary work bears the striking hallmarks of traditional miniatures. How do you view this fusion?

I was trained as a miniature painter and the training was very strict. We were supposed to sit on the floor for hours and hours working on this small thing. Even our breathing had to have a certain discipline so as not to affect the art. So miniatures are a part of my blood. Whatever I do, it connects to the traditional. For me, I do my art the way I want. The way it expresses itself or connects is just the way it flows.

Your Met installation morphed miniature motifs into giant splatters of blood. You said the work was a meditation on hope amid violence. Would you describe your work as political?

Violence is a byproduct of the deteriorating political situation. Violence is what inspired the installation. So it’s very politically and socially connected. There exists a lot of violence around us. I cannot ignore it. This reality of a devalued existence cannot be ignored. The piece is ultimately about that glimmer of hope in despair. It showcases the strength of the Pakistani nation. Few nations would survive the struggles Pakistan is facing. The first time that I used this image of blood and foliage was in 2010, after the bomb blast in R.A. Bazaar in Lahore Cantonment. My family had a very strong affiliation with that place, we would go there for groceries and the market was full of life and wonder. So the images I saw of the market after the bomb blast completely shocked me.

Tell us about the exhibition you’re putting together to showcase emerging Pakistani talent.

I have been teaching for the past 17 or 18 years, so I encounter some amazing stuff that these young people are doing. Currently there are only a few young Pakistani artists who are known internationally. These names are repeated over and over. There is so much exciting stuff produced here that is, sadly, just not being shown. The exhibition is a work-in-progress and aims at promoting and expanding the art scene in Pakistan. It will be about the art itself, not the names. As for what I look for in good art, the concept and execution both must be strong.

What was your reaction when you heard you were Deutsche’s Artist of the Year?

To be honest, I didn’t even know about this award. I remember coming home from a dinner and seeing an email from the curator of the Guggenheim telling me that I had been chosen for the award. My first thought, because this was a bank and all, was that this has to be some kind of scam, that they’ll ask me for my account details or money. Once I had verified that this was real, I was absolutely thrilled. I realized much later how big this actually was.