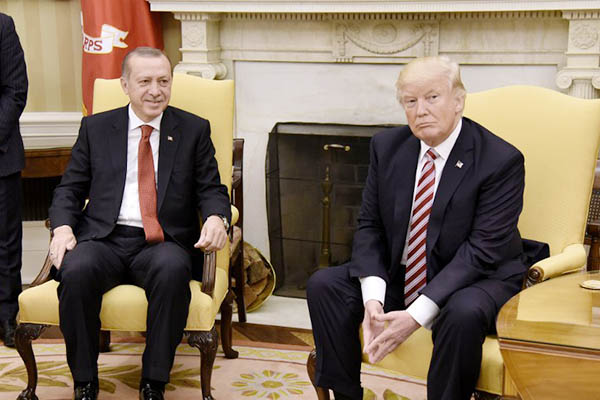 Presidents Donald Trump and Recep Tayyip Erdogan stood side by side at the White House on Tuesday and promised to strengthen strained ties despite the Turkish leader’s stern warning about Washington’s arming of a Kurdish militia.

Fresh from securing his grip on Turkey with a referendum to enhance his powers, Erdogan came to the Oval Office with complaints about U.S. support for Kurdish fighters and what Ankara says is Washington’s harboring of the mastermind of a failed coup. But both leaders also tried gamely to put a brave face on their differences and to renew a key alliance between NATO’s leading power and its biggest Muslim member, partners in the fight against the Islamic State group in Syria and Iraq.

“It is absolutely unacceptable to take the YPG-PYD into consideration as partners in the region, and it’s going against a global agreement we reached,” Erdogan said, referring to the Kurdish Peoples’ Protection Units (YPG) in Syria. “In the same way, we should never allow those groups who want to change the ethnic or religious structures in the region to use terrorism as a pretext,” he added, suggesting that the Kurds are using the anti-I.S. fight as cover for separatist nationalism.

Trump was one of the first leaders to congratulate Erdogan on winning the April 16 vote to strengthen his office, and his Turkish counterpart repaid the compliment on Tuesday by hailing his host’s “legendary triumph” in the U.S. presidential race. “Of course Mr. Trump’s victory has led to an awakening of new expectations for Turkey and the region it is in. We know the new U.S. administration will not let these hopes be in vain,” Erdogan said.

The U.S. leader paid tribute to Turkey’s historical contributions to the Western alliance’s Cold War battles and promised: “Today we face a new enemy in the fight against terrorism and again we seek to face this threat together.”

Washington and Ankara are bitterly at odds over U.S. support for the YPG, a Syrian armed faction that acts as the main ground force in the Pentagon’s plan to defeat the Islamic State group but that Turkey deems a front for the banned Kurdistan Workers’ Party (PKK). And Erdogan remains angry that the United States continues to host Islamic preacher Fethullah Gulen, a former ally who chose exile in Pennsylvania and who has now been accused of masterminding last year’s bloody attempted coup in his homeland.

While the pair shared warm words at their joint public appearance, Erdogan again made it clear that he would never accept an autonomous YPG-led Kurdish area in Syria, and that he had “frankly communicated” his expectation that Washington hand over Gulen.

After their meeting, Trump and Erdogan exchanged friendly tweets. The U.S. leader said it was a “great honor” to welcome his guest and the Turk responded by thanking him and declared: “I believe today’s meeting will strengthen our longstanding alliance and strategic partnership.”

Trump hoped to secure at least grudging Turkish agreement not to oppose the U.S.-led drive by YPG fighters to oust the Islamic State from their Syrian stronghold of Raqa. In return, Trump may have had to give Erdogan assurances that Gulen will be closely monitored while the U.S. courts examine an extradition request and pledge that Washington will eventually endorse a Turkish offensive against PKK bases in Sinjar, northern Iraq.

“That’s the main ask,” said Soner Cagaptay, director of the Turkish research program at the Washington Institute of Near East Policy. “He’s going to want U.S. support for a Turkish operation against Sinjar.”

Turkish officials had spoken enthusiastically about Trump’s election as a chance to turn a new page. But hopes could have been dashed last week when the Pentagon confirmed that it has increased its support for the YPG by directly arming its fighters ahead of the battle to oust the Islamic State from its de facto capital in Syria.

Ankara regards the YPG as simply the Syrian arm of the “terrorist” PKK, which has waged a deadly insurgency inside Turkey since 1984, and Erdogan is worried his deadly enemy will find itself in charge of a U.S.-armed statelet on his southern frontier.

After Erdogan left the White House, tensions over the Kurdish issue spilled out into the streets of Washington. According to witnesses, a brawl erupted when the Turkish president’s security detail attacked protesters carrying the flag of the Kurdish PYD party outside the ambassador’s residence. City police reinforcements restored order, but emergency services said nine people were injured and taken to hospital, one of them in critical condition.