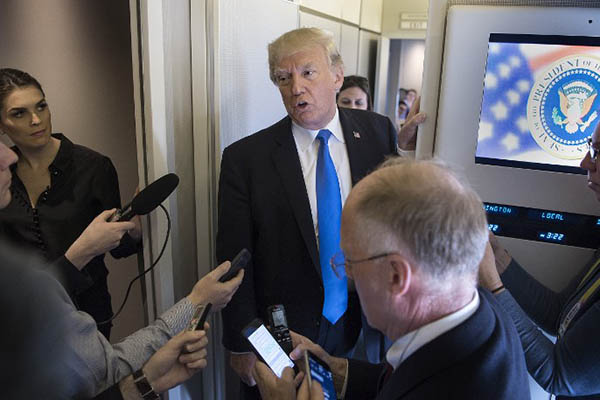 Donald Trump said he had done “a really fantastic job” on a five-nation tour of Asia in which he had made a lot of friends, but he ended it abruptly on Tuesday by skipping most of a Philippine summit.

The U.S. president, who began his journey in Japan 12 days ago, said his trip had seen progress in his goal of narrowing America’s trade deficits. “I’ve made a lot of friends at the highest level,” Trump told reporters shortly before boarding Air Force One in Manila, adding the trip was “tremendously successful.”

“I think the fruits of our labor are going to be incredible,” he said, later predicting an already unveiled $300 billion worth of trade deals “is going to be quadrupled very quickly” to over a trillion dollars. He offered no evidence for this assessment. “It’s been a really great 12 days,” he said. “I think we have done a really fantastic job.”

Before leaving, Trump gathered briefly with 18 other world leaders ahead of the start of the East Asia Summit, the final set piece of his trip. The former reality TV star had initially planned to skip the summit, then backtracked after criticism it could be seen as a snub. But he did not stay for the official start of the summit on Tuesday afternoon, also missing the preceding group photo with his fellow leaders.

Secretary of State Rex Tillerson sat in for him at the summit, which was scheduled to run into the evening. The summit groups the 10-member Association of Southeast Asian Nations with Australia, China, India, Japan, South Korea, New Zealand and Russia, as well as the United States.

In a trip that was dominated by the North Korean nuclear crisis, Trump was treated to pomp and pageantry in Japan and South Korea, where he repeatedly blasted the regime of Kim Jong-Un. Aboard Air Force One, he claimed success “in terms of North Korea and getting everybody together. I think their acts are all together.”

In China, where President Xi Jinping rolled out the red carpet for a “state visit plus”—a welcome Trump declared “people really have never seen anything like”—the White House trumpeted more than $250 billion of trade deals. Analysts say the headline figure hides a paucity of deliverables, with lots of the agreements being non-binding memorandums of understanding. They say many will take years to yield results and some will never materialize.

En route to Hawaii, however, Trump was bullish, predicting a rapid closing of American trade deficits. “I think one of the things we really accomplished big is relationship, and also letting people know that from now on, things are going to be reciprocal,” he said. “We can’t have trade deficits of $30, $40, $50 billion; $300 billion in the case of China. We can’t do that. We have to have reciprocal trade. You will see numbers that you won’t believe over the years. Because over a period of years, they will be treating us much differently than they have in the past.”

During a stop in Vietnam, the issue of alleged Russian interference in the 2016 U.S. election reared its head again when Trump appeared to endorse President Vladimir Putin’s assertion that there had been no plot by Moscow.

In the Philippines, Trump sparked headlines with his pally relationship with President Rodrigo Duterte, a man who has boasted of personally killing people and whose drug war has claimed thousands of lives. Speaking to reporters as he flew over the Pacific Ocean, Trump again made no mention of human rights or the extrajudicial killings that campaigners say are part and parcel of Manila’s drugs war. But he praised the “important military location” of the country and said ties, which soured when his predecessor Barack Obama spoke out against Duterte’s campaign, were back on track. “Now we have a very good relationship there. We’re back with the Philippines,” he said.