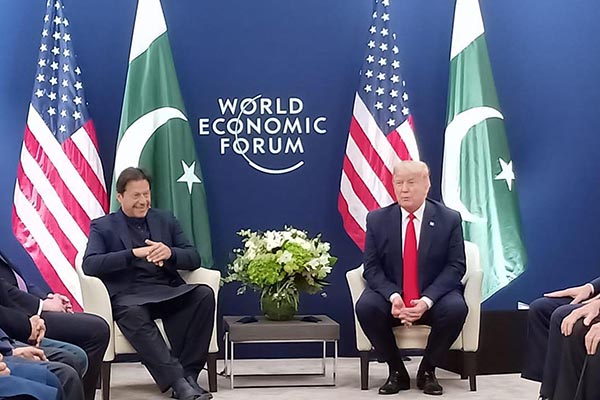 Ahead of private meeting with P.M. Khan, U.S. president says Washington and Islamabad have never been closer

Washington has been following the situation in Jammu and Kashmir “very closely” and is willing to help resolve the matter, U.S. President Donald Trump reiterated on Tuesday on the sidelines of the World Economic Forum summit in Davos.

Referring to Prime Minister Imran Khan as a “friend,” Trump told journalists ahead of a private meeting between the two leaders that he was willing to discuss the Kashmir dispute with India Prime Minister Narendra Modi. “We’re talking about Kashmir […] if we can help, we certainly will be helping. We’ve been watching that and following it very, very closely,” he said.

New Delhi last August unilaterally revoked the special status for Kashmir that had been enshrined in its constitution. Khan has slammed this move from the outset and vowed to bring international attention to the plight of the Kashmiri people. Trump had offered mediation between India and Pakistan on Kashmir last year, claiming the Indian prime minister had asked him to do so. However, his statement incensed India, forcing New Delhi to deny the offer had ever been made.

In Davos, Trump said that Pakistan and the U.S. enjoyed good relations presently, adding that the two nations had never been “as close” as they are today. However, he demurred on whether he would personally visit Pakistan; the U.S. president is set to visit neighboring India next month. “Well, we are meeting right now. I wanted to say hello,” he said of his meeting with Khan.

Khan, meanwhile, reiterated Pakistan’s desire for peace and regional stability, telling journalists he wanted to discuss the situation in Afghanistan with Trump. “The main issue [I want to talk about] is Afghanistan, because it concerns the U.S. and Pakistan,” he said, adding Islamabad and Washington were on the same page. “Both of us are interested in peace there and an orderly transition in Afghanistan with talks between Taliban and the government,” he said.

This was the third time the two world leaders have met since Khan assumed office in 2018. Both men are in Davos for the 50th anniversary of the WEF where political leaders, businessmen, heads of international organizations and civil society representatives are to debate contemporary economic, geopolitical, social and environmental issues.