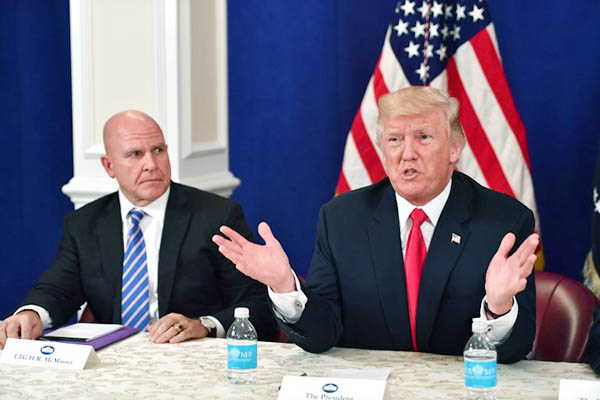 President Donald Trump on Thursday blasted Iran for not “living up to the spirit” of the nuclear deal it reached in 2015 with world powers including the United States, and reiterated that he thought it was a “horrible agreement.”

“I don’t think Iran is in compliance,” Trump said from his golf club retreat in New Jersey, where he is spending two weeks away from Washington for a working vacation. “I don’t think they’re living up to the spirit of the agreement.”

The accord gave Iran relief from sanctions in exchange for accepting curbs to its ability to make material for nuclear weapons. Last month, Trump was forced to back off from a key campaign promise to withdraw from the deal.

Trump had described it as “the worst deal ever” and accused Tehran of continuing to back extremist groups in the Middle East. But on July 17, the White House certified that the Islamic republic was in fact sticking to the nuclear agreement. Still, a day later, the United States imposed new sanctions on Iran—targeting 18 individuals and entities—over its ballistic missile program.

The State Department also said then that it “remains deeply concerned about Iran’s malign activities across the Middle East which undermine regional stability, security, and prosperity.”

The U.S. Treasury punished Iran again later in July after Tehran tested a satellite launch rocket, singling out six companies it said were involved in the Islamic republic’s missile program. Iran was also hit in a sanctions bill that Trump reluctantly signed into law last week. It also imposed punitive measures on Russia—over its alleged meddling in the U.S. election—and North Korea over its missile and nuclear programs.

Those sanctions target Iran’s missile program and human rights violations, which were not covered under the 2015 nuclear deal. Iran nevertheless complained that these sanctions were in violation of the accord.