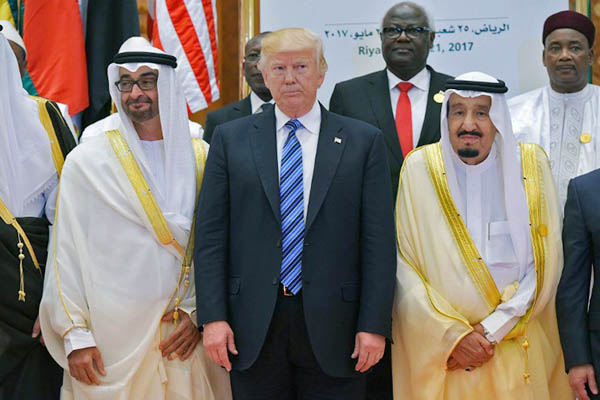 Washington announced a huge arms deal with Saudi Arabia and took aim at Iran on Saturday as President Donald Trump began a foreign tour looking to leave domestic troubles behind.

The $110 billion deal for Saudi purchases of U.S. defense equipment and services came at the start of an eight-day trip that will also take Trump to Jerusalem, the Vatican and meetings with leaders in Europe. Trump hailed a series of business deals reached during meetings in Riyadh, with Saudi Foreign Minister Adel al-Jubeir saying they were worth more than $380 billion.

White House spokesman Sean Spicer said on Twitter that the defense agreement was the “largest single arms deal in U.S. history” and said other deals amounted to $250 billion in commercial investment. Secretary of State Rex Tillerson said the intent of the arms deal was to support Riyadh “in particular in the face of malign Iranian influence and Iranian-related threats which exist on Saudi Arabia’s borders.”

Sunni power Saudi Arabia and predominantly Shia Iran are opposed in a range of regional conflicts including in Syria and in Saudi neighbor Yemen, where Riyadh is leading a military coalition battling Tehran-backed rebels. Tillerson said the arms package “bolsters the kingdom’s ability to provide for its own security and contributing to counter-terrorism operations throughout the region.”

The harder line on Iran will be very welcome in Saudi Arabia and among its Arab Gulf allies, who saw Trump’s predecessor Barack Obama as too soft on Tehran. Trump had been assured a warm welcome in Riyadh, which is keen to rebuild ties with a major ally.

The president and first lady Melania Trump were greeted by King Salman as they disembarked at King Khalid International Airport in Riyadh on Saturday morning. Trump and his wife, who dressed conservatively in black but did not cover her hair as Saudi women are required to do, walked side-by-side to the tarmac where they both shook hands with the 81-year-old king.

Trump in 2015 criticized then-first lady Michelle Obama for not wearing a headscarf during a visit to Saudi Arabia, saying on Twitter that her hosts had been “insulted.” Later, Trump joined in a traditional sword dance welcome ceremony ahead of a banquet at the Murabba Palace.

The mood in Riyadh was in sharp contrast to Washington where pressure is building after fresh claims over the Trump team’s alleged links to Moscow. It was announced late Friday that James Comey, the former FBI chief fired by Trump, had agreed to testify publicly about Russian interference in the U.S. elections.

Reports also emerged that Trump had called Comey “a nut job” and that the FBI had identified a senior White House official as a “significant person of interest” in its probe of Russian meddling.

After talks with senior Saudi officials on Saturday, Trump was to give a speech to dozens of Muslim leaders on Sunday. It has been touted as a major event—along the lines of a landmark address to the Islamic world given by Obama in Cairo in 2009. It will be especially sensitive given tensions sparked by the Trump administration’s attempted travel ban targeting several Muslim-majority nations and accusations of anti-Islamic rhetoric on the campaign trail.

While most U.S. presidents make their first foreign trip to neighboring Canada or Mexico, 70-year-old Trump has opted instead for the Middle East and Europe. He travels to Israel and the Palestinian Territories on Monday and Tuesday, and then to the Vatican and to Brussels and Italy for NATO and G7 meetings.

The avalanche of revelations in the run-up to his departure has eroded Trump’s standing at home.

On Friday, a report by The Washington Post that the probe into his campaign’s Russia ties had identified a “significant person of interest” in the White House undercut Trump’s insistence his election bid had nothing to do with the Kremlin. The White House was rocked by another bombshell when reports emerged that Trump said his firing of “nut job” Comey had relieved “great pressure” on him due to the investigation. The scandals have revived questions about his ability to strike a presidential tone with his foreign counterparts.

The first leg of the trip was likely to be the easiest—Saudi leaders are keen to work with an administration they see as more in line with their goals. The normally austere kingdom put on a major display for the visit, with Riyadh’s streets lined with U.S. and Saudi flags and billboards featuring Trump and King Salman.

The next leg in Israel could be more complicated, despite the history of warm ties between Trump and Prime Minister Benjamin Netanyahu. The visit is already awash in controversy, from a row over Trump’s planned visit to Jerusalem’s Western Wall, the holiest prayer site for Jews, to his alleged disclosure of Israeli intelligence to Russian officials.

After meeting Netanyahu in Jerusalem, Trump will see Palestinian president Mahmud Abbas in Bethlehem, part of his efforts to revive the long-stagnant peace process.

On Tuesday, Trump heads to Rome to meet with Pope Francis. The two men are at odds on everything from climate change to refugee policy, although the pontiff says he will give the U.S. leader an open-minded hearing. The president will then meet NATO members in Brussels and attend a G7 summit in the Sicilian town of Taormina. These meetings—including with new French President Emmanuel Macron—will be closely watched for signs of whether Trump and traditional U.S. allies in Europe can work together.