Trump Warns U.N. Assembly He May Have to ‘Destroy’ North Korea 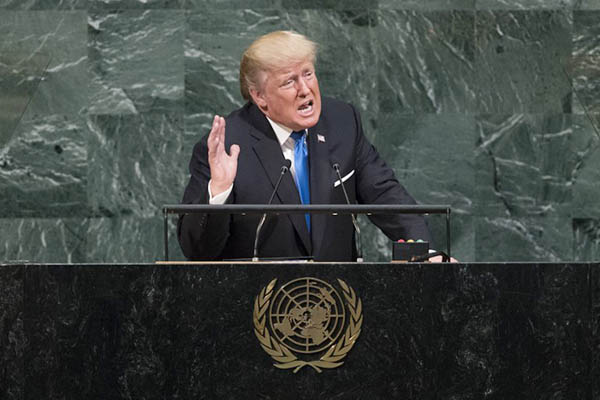 A bellicose President Donald Trump used his maiden address to the U.N. General Assembly on Tuesday to warn “Rocket Man” Kim Jong-Un that he will “totally destroy” North Korea if it threatens the United States or its allies.

Appearing before the 193-member body that emerged from the ashes of World War II, Trump boasted of America’s military strength, signaled he is ready to rip up a nuclear accord with the “murderous regime” in Tehran, and berated U.S. foes from Pyongyang to Caracas.

“The United States has great strength and patience,” Trump said, as he followed in the footsteps of U.S. presidents from Harry Truman to Barack Obama, “but if it is forced to defend itself or its allies, we will have no choice but to totally destroy North Korea.”

“Rocket Man is on a suicide mission for himself and for his regime,” he said, using his Twitter-friendly new nickname for the North Korean dictator. “The United States is ready, willing and able, but hopefully this will not be necessary.”

Throughout the 42-minute remarks, Trump did little to temper his trademark tough-guy language for the assembled statesmen and women, warning that swathes of the world were “going to hell” and declaring any trade with North Korea an “outrage.” In language some commentators compared to former president George W. Bush’s “axis of evil” speech, Trump pilloried Iran as a corrupt “rogue state” and threatened to rip up the landmark international deal struck in 2015 to curb Tehran’s nuclear program.

“Frankly, that deal is an embarrassment to the United States, and I don’t think you’ve heard the last of it,” Trump declared. “Believe me. It is time for the entire world to join us in demanding that Iran’s government end its pursuit of death and destruction.”

But, the U.S. leader added, the greatest threat to the Tehran regime was not the American military but the restless Iranian people. Iran’s Foreign Minister Mohammed Javad Zarif responded on Twitter: “Trump’s ignorant hate speech belongs in medieval times—not the 21st century U.N.—unworthy of a reply. Fake empathy for Iranians fools no one.”

The packed General Assembly hall greeted Trump’s tough rhetoric and calls for nation states—rather than supranational bodies—to form the basis of the global order with some polite clapping. But a few pauses for applause were met with stony silence.

Trump did not back away, suggesting his populist “America First” campaign rhetoric should be an example to other U.N. members: “Our respect for sovereignty is also a call for action. All people deserve a government that cares for their safety, their interests. As long as I hold this office, I will defend America’s interests above all else, but in fulfilling our obligations to our nations, we also realize that it’s in everyone’s interests to seek the future where all nations can be sovereign, prosperous and secure.”

After decades in which America has led the drive toward a global rules-based order, Trump indicated his foreign policy would define the national interest much more narrowly. “For too long the American people were told that mammoth, multinational trade deals, unaccountable international tribunals and powerful global bureaucracies were the best way to promote their success,” Trump said. “But as those promises flowed, millions of jobs vanished and thousands of factories disappeared.”

The speech provoked strong responses almost immediately—drawing praise from Israeli Prime Minister Benjamin Netanyahu. Trump notably made no mention of the Middle East peace process—nor of climate change, nor the crisis in Myanmar—during his remarks, and scarcely touched on relations with China and Russia. But Trump’s tough talk on Iran delighted the Israeli leader who dedicated much of his own later speech to alternating praise for Trump with a promise to fight what he said was an “Iranian Curtain” descending across the Middle East.

In Washington, Trump’s speech was welcomed by many prominent Republicans, including Senator Orrin Hatch, who welcomed Trump’s stark challenge to North Korea’s Kim. “Good for him,” Hatch told reporters. “It’s about time that somebody talked turkey to that little bastard over there.”

But foreign policy experts were less impressed, with some saying Trump was attempting to fashion an ad hoc policy doctrine to justify and unite a diverse series of campaign promises and impetuous Tweets. Iranian President Hassan Rouhani warned the United States would forfeit the trust of the international community if it abandons the nuclear accord with Tehran.

“If the United States were not to adhere to the commitments and trample upon this agreement, this will mean it will carry with it the subsequent lack of trust of countries,” Rouhani, in New York to attend the U.N. General Assembly, told NBC. French President Emmanuel Macron, in his own U.N. address, said ending the deal would be a “grave error, and not respecting it would be irresponsible.”