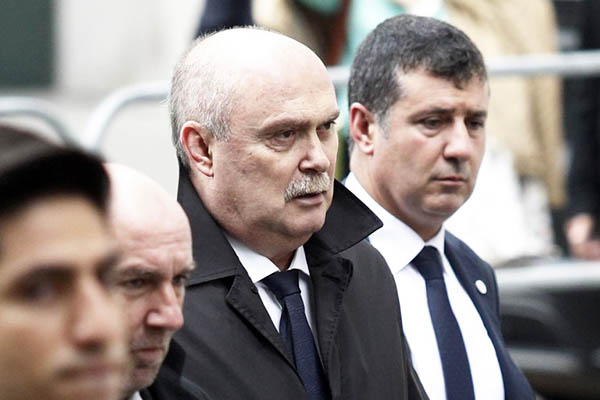 Foreign minister claims strikes on militants in Syria will intensify in coming days.

Turkey’s foreign minister on Wednesday said Ankara “has plans” for a joint operation with the United States to end the presence of Islamic State militants along any part of its border with Syria.

Foreign Minister Feridun Sinirlioglu told the state-run news agency Anatolia that I.S. militants still had a presence along some of Turkey’s border with northern Syria. “We have certain plans to put an end to the control that I.S. is still exercising on a zone of our frontier,” he said. “These are plans for a joint operation with the United States. When these plans are completed, our operations will continue with more and more intensity. You will see this in the days to come.”

U.S. Secretary of State John Kerry said in an interview with CNN late Tuesday that “we are entering an operation with the Turks” to shut off 98 kilometers of border still not secure from I.S. Their comments come amid growing momentum for coordinated international action against I.S. after the Paris attacks last week claimed by the extremist Islamist group which killed 129 and injured 350.

Turkish security forces on Tuesday killed one suspected I.S. militant seeking to cross into Turkey from Syria, the army said Wednesday. Twenty-one people, including nine children, who were part of the group trying to cross the border were detained.

Meanwhile, Turkish police said they detained eight suspected I.S. members at Istanbul’s main airport who had travelled from Morocco, adding they were planning to sneak into Europe posing as refugees.

Sinirlioglu did not expand on what the operation would entail but the Hurriyet daily quoted security sources as saying is would involve clearing an area from Mare to Jarablus in northern Syria of I.S. militants. It would be conducted by Turkish F-16s and U.S. F-15s from the Turkish base of Incirlik, backed up by U.S. A-10s to destroy armored vehicles belonging to I.S.

Kerry’s comments did not imply any ground operation but a unit of Syrian Turkmen forces linked to the Free Syrian Army (FSA) would cross the border once the air campaign was completed, Hurriyet added.

Turkey has for months been touting the idea of a safe zone for Syrian refugees inside Syria. But the plan has so far found just a lukewarm response from its Western allies and its implementation remains unclear. Sinirlioglu had said on the sidelines of the Group of 20 meeting in Antalya that at the moment Turkey had “no intention” of using its ground troops to intervene in Syria.

“A ground intervention in Syria is not on the agenda of Turkey,” said ruling Justice and Development Party (AKP) spokesman Omer Celik Wednesday. “If there is not a political solution, then Syria will become like Afghanistan,” he added.

Speaking at the G20 Monday, U.S. President Barack Obama had expressed skepticism about a safe zone, saying “a true safe zone requires us to set up ground operations.”

“There’s a whole set of questions that have to be answered there,” including how such a zone would work and whether it would be a “magnet” for terror attacks, Obama added.

Obama’s envoy for the coalition against I.S., Brett McGurk, told CNN the U.S. and Turkey had “very, very intense discussions” over how to pressure I.S. in the border area. “This is all part of this concerted pressure campaign because we’re going to do everything we can to suffocate and destroy this network,” he said.