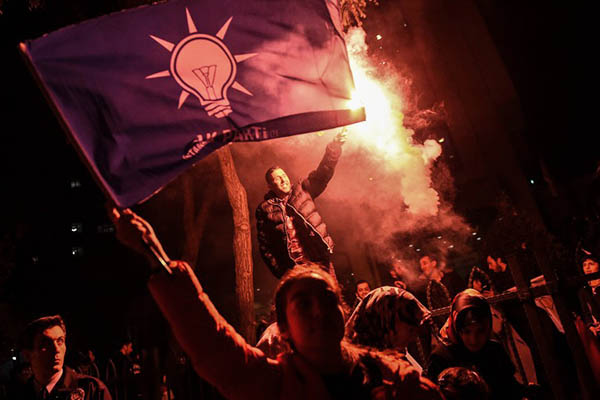 Turks woke on Monday to a country once again under single-party rule, after the Justice and Development Party regained its parliamentary majority in a surprise election sweep that strengthens the hand of President Recep Tayyip Erdogan.

The AKP party founded by the divisive strongman, who has dominated Turkish politics for more than a decade, won 49.4 percent of the vote to secure 316 seats in the 550-member parliament with nearly all votes counted, easily enough to form a government on its own. The result is huge personal victory for 61-year-old Erdogan, who may now be able to secure enough support for his controversial ambitions to expand his role into a powerful U.S.-style executive presidency.

The AKP lost its majority for the first time in 13 years in June, when the pro-Kurdish People’s Democratic Party (HDP) entered parliament for the first time. Growing conflict with Turkey’s largest minority remains a key challenge for the new government. Erdogan said voters had chosen “unity and integrity” in his first comments after the polls, although analysts said his surprise victory was largely down to mounting concern over renewed violence with Kurdish militants and a surge in bloody jihadist attacks.

“Our people clearly showed in the Nov. 1 elections that they prefer action and development to controversy,” Erdogan said in a statement. Prime Minister Ahmet Davutoglu welcomed the result, saying there were “no losers, but winners.”

Speaking to thousands of people who waited for hours in the cold to hear him speak from the balcony of the AKP headquarters in the capital, the premier vowed to protect the human rights of all of Turkey’s 78 million inhabitants. “You saw the dirty games played in our country, and you have changed the game,” Davutoglu said.

The political landscape has changed dramatically in Turkey since June, with the country even more divided along ethnic and sectarian lines. Analysts said it appeared voters had turned away from nationalist and Kurdish parties, after the collapse of a truce with outlawed Kurdistan Workers’ Party (PKK) in July prompted a surge in bloody attacks.

Erdogan said the result “delivered an important message for the PKK: oppression and bloodshed cannot coexist with democracy.” Support has also fallen for the HDP, which some accuse of being a front for the rebels, with Sunday’s vote seeing the party only just managing to scrape past the electoral threshold of 10 percent to stay in parliament.

But critics say Erdogan capitalized on public fear to regain a majority. “Erdogan rode the wave of violence back to power,” said Aykan Erdemir of the Washington-based Foundation for Defense of Democracies (FDD) and a former Turkish opposition M.P.

Underscoring one of the key challenges ahead for a new AKP administration—the state of the Kurdish peace process—clashes erupted briefly between police and protesters in the main Kurdish city of Diyarbakir. HDP leader Selahattin Demirtas said it was not a “fair election” after his party halted campaigning in the wake of the Islamic State group attacks that targeted pro-Kurdish activists.

“But it’s still a big victory, we have lost one million votes but we have stood tall against this policy of massacres and fascism,” he said, vowing to continue to the faltering push for peace between Ankara and PKK rebels.

The threat of further jihadist violence also overshadowed the poll after a string of attacks blamed on I.S. jihadists, including twin suicide bombings at an Ankara peace rally last month that killed 102 people—the bloodiest in Turkey’s modern history.

During the election campaign, Erdogan declared that only he and Davutoglu could guarantee security, crisscrossing the country with the message: “It’s me or chaos.”

The main opposition Republican People’s Party (CHP) scored about 25.4 percent of the vote, similar to its June result. Support for the Nationalist Movement Party (MHP) fell to just under 12 percent, with commentators suggesting its voters shifted to the AKP.

The I.S. attacks have drawn Turkey even further into the quagmire in neighboring Syria as it struggled with the burden of more than two million refugees and found itself at odds with its NATO allies over the conflict. After long supporting rebels fighting the Damascus regime, Ankara was cajoled into joining the U.S.-led coalition against I.S. and launched its own “war on terrorism,” also targeting PKK fighters and even U.S.-backed Syrian Kurds.

Erdogan, dubbed the “big master” or “Sultan” who has dominated Turkey’s political scene for more than a decade, is revered and reviled in equal measure. He was hailed in the West for creating what was once regarded as a model Muslim democracy but is now accused of blatantly cracking down on opponents and critical media.

Opponents fear that if he succeeds in expanding his powers, it would mean fewer checks and balances in a country that has long aspired to join the E.U. Turkey’s economy is also in trouble, with growth slowing sharply from the dizzy heights of five years ago, unemployment rising and the Turkish lira plunging more than 25 percent in value this year.

But as the AKP’s victory ended months of political uncertainty, the lira jumped more than three percent on Monday morning, Bloomberg News reported. By 8:30 a.m. local time, however, it had given up some gains to trade around 2.813 against the dollar.