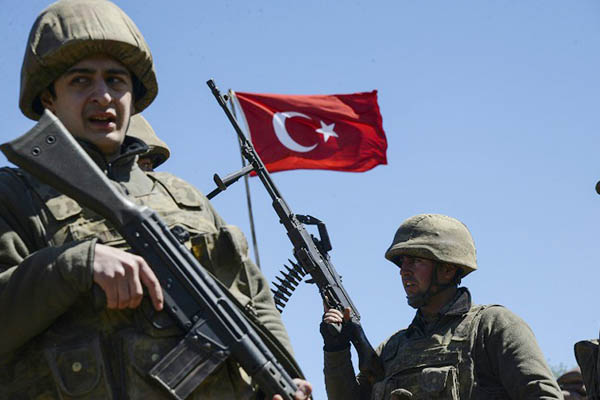 Turkish soldiers stand guard at the entrance to Cizre on March 22, 2016. Ilyas Akengin—AFP

Ankara says report is based on false information and ‘unprofessional.’

Turkey condemned on Friday a U.N. report as “biased” after it accused Turkish security forces of committing serious abuses during operations against Kurdish militants in the nation’s southeast after a ceasefire collapsed in July 2015.

The report from the United Nations’ rights office details evidence of “massive destruction, killings and numerous other serious human rights violations committed between July 2015 and December 2016 in southeast Turkey.”

“Government security operations” have targeted more than 30 towns and displaced 355,000 to half a million people, mostly Kurds, the report said. However, the Turkish foreign ministry fired back, saying: “The ‘report’ about anti-terror operations in the southeast is biased, based on false information and far from professional.”

“The space in the report given to a terror organization’s propaganda overlapping with unfounded allegations is not accepted by our side,” the ministry added, referring to the outlawed Kurdistan Workers’ Party (PKK).

According to statistics given by Ankara to the U.N., the unrest in the southeast has claimed some 2,000 lives over the last year and half. That figure includes about 800 soldiers and 1,200 “local residents,” the report said, but there was no available breakdown for the number of Kurdish militants and civilians killed.

The outlawed Kurdistan Workers’ Party has waged an insurgency against Turkey since 1984, though the violence was contained during the truce agreed in 2013. But fighting resumed when the ceasefire fell apart in the summer of 2015.

Satellite images of areas affected by the latest unrest “indicate an enormous scale of destruction of the housing stock by heavy weaponry,” the report said, with some neighborhoods “razed to the ground.”

In Cizre, a mainly Kurdish town on the Syrian border, residents described the devastation of neighborhoods as “apocalyptic,” the U.N. said. In early 2016, nearly 200 of the town’s residents, including children, “were trapped for weeks in basements without water, food, medical attention and power before being killed by fire, induced by shelling,” it said.

One man told the U.N. that his family was summoned by authorities in Cizre to collect his sister’s remains but were given just “three small charred pieces of flesh.” The public prosecutor in Cizre said the woman had been identified through a DNA match.

The U.N. allegations come at a delicate time for Ankara, which is gearing up for an April referendum on whether to expand President Recep Tayyip Erdogan’s powers. U.N. rights chief Zeid Ra’ad Al Hussein criticized Erdogan’s government directly, saying he was concerned that “no credible investigation has been conducted into hundreds of alleged unlawful killings.”

The U.N. rights office said it had for more than a year been seeking access to areas affected by the anti-PKK operations, but Erdogan’s government had not approved a visit. Zeid also denounced Ankara for challenging the “veracity” of the report’s findings while refusing to give his investigators access.

But the Turkish foreign ministry said: “If Zeid had responded to our invite and had come to our country, he would have had the chance to see personally that the claims in the report do not reflect the truth.”

More than 40,000 people have been killed in the conflict between the military and the PKK, which seeks greater rights and autonomy for Turkey’s Kurdish minority. The insurgent group is considered a terrorist organization by Turkey, the European Union and the United States.

A broad crackdown by the Turkish authorities after a failed coup attempt last July has led to further abuses in the southeast, the report said. Independent journalists have been harassed and Kurdish-language media outlets have been closed, making it even more difficult to publicize abuses committed during clashes.

Across Turkey in the wake of the attempted coup, more than 100,000 people including journalists have been dismissed or detained by the police, accused of links to coup-plotters and also to the PKK. Zeid said he understood that Turkey faced difficult challenges in the aftermath of the attempted coup but warned that intensifying a crackdown on basic rights would only fuel further instability.