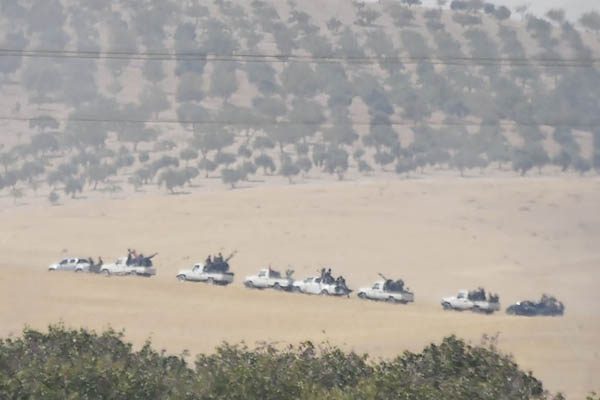 Turkey vowed on Tuesday to give full support to efforts to free a key Syrian border town from the control of Islamic State jihadists as anticipation grew of a major Ankara-backed offensive against the group.

Turkish forces also pounded jihadists in Syria with new artillery strikes after a deadly suicide bombing in the city of Gaziantep at the weekend and repeated rocket fire across the border. Activists have said hundreds of Ankara-backed rebels were preparing an offensive against the I.S. group to seize control of the Syrian town of Jarabulus, which lies opposite the town of Karkamis in Turkey.

Without confirming the operation, Foreign Minister Mevlut Cavusoglu pledged to give “all kinds of support” to push the jihadists out of Jarabulus. “We do not want Daesh to exist in Iraq and Syria,” he told reporters.

The pledge came a day before U.S. Vice President Joe Biden was due in Ankara to meet Turkey’s leadership, with agreeing on a unified strategy on Syria set to be a crucial issue. He is by far the highest-ranking Western official to visit Turkey since the coup attempt to unseat President Recep Tayyip Erdogan.

“What we have said, since the beginning, is that having Jarabulus or any other city held by I.S. is unacceptable,” he said.

The authorities also ordered residents to vacate Karkamis and the surrounding area for safety reasons after the rocket fire, although there was no indication this was linked to the impending operation. “Residents of the town center and six neighborhoods [are] advised to relocate to more secure areas,” the local governor’s office said in a statement.

Nine mortar rounds fired from Jarabulus hit the center of the town while two more hit another neighborhood, it added. No casualties or injuries were reported. Turkish artillery responded by shelling I.S. positions around Jarabulus.

Abdulkadir Selvi, a well-connected columnist for the Hurriyet daily, said the Turkey-backed offensive “could begin at any moment.” The move by Ankara-backed rebels could potentially put them on a collision course with the militia of the Kurdish Democratic Union Party (PYD), which Ankara vehemently opposes and which also has designs on Jarabulus after seizing the strategic Manbij area in northern Syria from I.S.

Rami Abdul Rahman, the head of the Syrian Observatory for Human Rights, said the “Turkish shelling in Syria aimed to prevent the advance of troops backed by Kurds from Manbij towards Jarabulus.” He told AFP the commander of Kurdish-dominated forces headed to Jarablus, Abdel Satar al-Jader, was also “assassinated” on Monday after announcing he planned to resist the Turkish advance. There was no confirmation from Turkish sources.

Turkey regards the PYD as a terror group, although Washington sees its People’s Protection Units (YPG) militia as the most effective fighting force against the jihadists. The movements have come at a critical juncture for Turkey in Syria’s five-and-a-half-year war, with signs growing it is on the verge of a landmark policy shift.

Ankara has always called for the ouster of President Bashar al-Assad as the key to ending the conflict, putting Turkey at odds with his main supporters Iran and Russia. However Prime Minister Binali Yildirim at the weekend for the first time acknowledged that Assad was one of the “actors” in Syria and may need to stay on as part of a transition.

Turkey has been shaken by one of the bloodiest years in its modern history, with a string of attacks by I.S. jihadists and Kurdish militants and the botched July 15 coup. The attack in Gaziantep on a Kurdish wedding party for a young couple has horrified the country, with the majority of the 54 victims aged under 18 and including children as young as four.