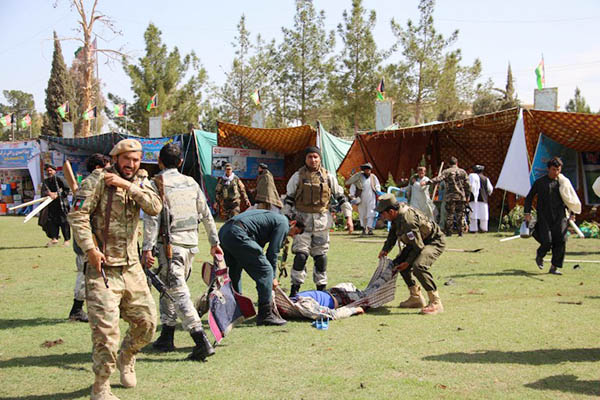 At least three people were killed and 30 wounded in twin explosions inside a stadium hosting an agricultural show in southern Afghanistan on Saturday, officials said.

People had put their agricultural products on display in the city’s main stadium when the explosions happened, said witness Omidullah Zaheer. “First a small explosion happened inside a tent in the stadium. People started to run towards the gates, when a second blast hit the crowd,” he said. “I saw some wounded people taken out of the stadium,” he said.

Zhwak said the casualties from the second blast had been minimal as people fled the area after the first.

Among the wounded were the deputy governor, deputy head of the provincial council, head of the information and the heads of the culture and agricultural departments. “I am fine,”said governor Mohammad Yasin, who was also present. “But three people were killed and 31 wounded in the blasts,” he added, giving a slightly higher injury toll than a statement issued by his office.

He blamed the Taliban for the attack.

Neither the Taliban nor any other group immediately claimed the blasts, which came two days after multiple blasts in Kabul killed six people and wounded over 20 others during the Persian New Year celebrations in a Shia area. The Islamic State group claimed responsibility for the attack in Kabul.