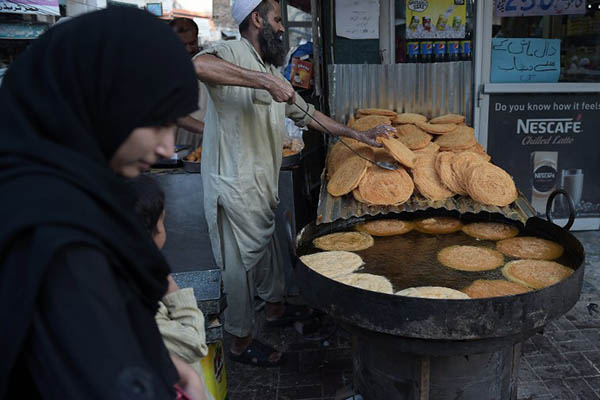 Much like years past, certain parts of Khyber-Pakhtunkhwa have started fasting a day ahead of the rest of the country.

Certain parts of Khyber-Pakhtunkhwa province, as in years past, are commemorating the Muslim holy month of Ramzan a day earlier than the rest of Pakistan, resulting in confusion among the region’s faithful, who have to choose between joining their province or the rest of their countrymen.

The annual confusion arises from Khyber-Pakhtunkhwa cleric Mufti Shahabuddin Popalzai’s refusal to accept the government-appointed Ruet-e-Hilal Committee’s rulings on the start of the holy month, claiming his methodology is shariah-compliant and more reflective of the true state of the lunar cycle. “Over 40 religious scholars are part of the [local] committee and have constituents that adhere to their edicts,” he told Newsweek. “A lot of people visit the Qasim Ali Khan Mosque ahead of Ramzan to ensure they are among the first to learn the holy month has started so they can help inform the nation,” he said, referring to the Peshawar mosque he heads.

Popalzai also claims that people in Khyber-Pakthunkhwa are more sensitive to the cycles of the moon, as their livelihoods depend upon it. “Most people in Khyber-Pakhtunkhwa are farmers and harvest crops based on the lunar cycle. Their first priority is always to find the new moon,” he said, adding that the province’s elevation also helped people see the moon earlier than the rest of the country.

“We had several witnesses from Kohat, Charsadda and Mardan, so Mufti Popalzai announced [around midnight] that today [Thursday] would be the first day of Ramzan,” said Hamood-ur-Rehman, the chairman of the management committee of the Qasim Ali Khan Mosque.

According to Rehman, the government committee’s timings do not permit them to receive eyewitnesses from Khyber-Pakhtunkhwa. “The central committee tends to end their meetings around 8 or 9 p.m. How can a witness who lives in Bannu, Tank or Waziristan reach them in Islamabad in such a short time? It would take at least four hours to reach Peshawar from Tank alone, much less traveling all the way to Islamabad.”

He said the local committee would stop its work if people stopped supporting them. “In 2001, the Pervez Musharraf-led government prevented Mufti Popalzai from conducting the moon-sighting meeting, but people still kept visiting him to inform him of their sightings,” he said. “The people trust us because we follow the rules laid down in the hadith [sayings of Islam’s Prophet] and the Quran,” he said.

The shariah-compliant moon sighting procedure in Pakistan involves a witness, accompanied by his local imam, traveling to Peshawar and informing the assembled clerics of what they saw. “The imam verifies to us that the witness is a good Muslim. Once this verification is complete, the religious scholars interrogate the witness on the size and shape of the crescent after which they decide whether or not Ramzan has started,” Rehman added.

The head of the government appointed Ruet-e-Hilal Committee, however, says there is no possibility they would be unable to receive witnesses, as they have regional offices in Peshawar, Lahore, and Karachi. “They [local committee] are merely challenging the writ of the state and the government should stop them,” said Mufti Muneeb-ur-Rehman. “If a government-appointed committee is present, then private individuals have no right to set up a parallel system,” he added.

The biggest victims of the annual tussle remain the average residents of Khyber-Pakhuntkhwa. “We have to follow the announcement of the local committee because most people in the region adhere to its decrees,” said Baz Roghani, who was fasting on Thursday. “What would we do if Eid occurred a day earlier in the rest of the province but not in our home?”

An elderly resident of Peshawar, Mohammad Farhan, said he couldn’t remember a single year that Khyber-Pakhtunkhwa had commemorated Eid with the rest of Pakistan. “I remember when I was a child, Mufti Popalzai’s father would find local eyewitnesses and announce the sighting of the new moon,” he said. “This month should be about the unity of the ummah. Do these people think Allah is happy with their division,” the 65-year-old asked.

“For the sake of Muslim unity, I would urge the Government of Pakistan to intervene and make both committees work together,” said Shahzad Khan, another resident of Peshawar. “It is a miserable experience to be offering Eid prayers in one mosque while Ramzan prayers are taking place in another just a few feet away.”