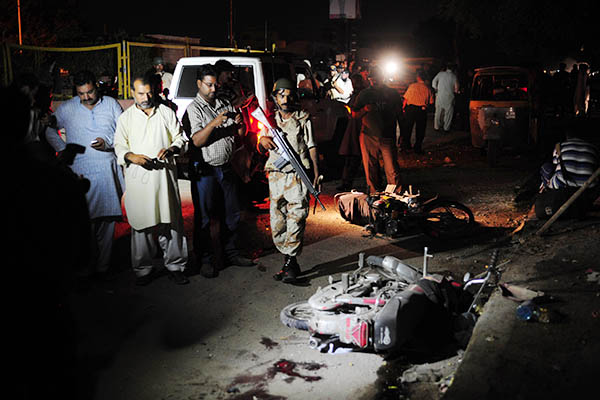 10 other soldiers injured in attack claimed by TTP are now in stable condition.

The death toll in a roadside bombing targeting troops in Karachi has risen to two, officials said Friday.

The blast was aimed at soldiers returning to their barracks in a truck after carrying out security duties at polling stations for by-elections in the city on Thursday.

“An Army soldier, who had sustained injuries in the attack died overnight of wounds, rising the toll in the attack to two,” said a senior security official. The official who did not want to be named said the condition of 10 other soldiers wounded in the attack was stable.

The attack initially killed a civilian and left 16 more people, including 11 soldiers, wounded in the violence-plagued port city.

The Tehreek-e-Taliban Pakistan have claimed responsibility for the attack. TTP spokesman Shahidullah Shahid told Newsweek the attack had intended to target security forces.

A bloody wave of killings and kidnappings has hit Karachi, a sprawling metropolis of 18 million people on the Arabian Sea and Pakistan’s economic heart. Bloody gang wars fed by ethnic and political bitterness, drugs and the Taliban, have created a culture of impunity, and the past two years have seen record death tolls.

In the first six months of 2013, 1,726 people were killed in Karachi compared with a previous high of 1,215 in the same period last year, according to the Human Rights Commission of Pakistan.