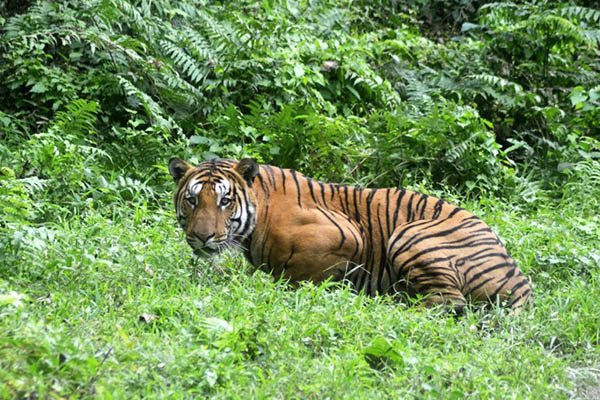 Report finds threats persist for endangered species with only 4,000 now left in the wild.

Two tigers are killed or illegally trafficked every week, according to fresh analysis published on Wednesday that warned of the “disastrous impact” on the 4,000 big cats left in the wild.

The latest estimate comes as experts and dignitaries, including Britain’s Prince William, gather in Vietnam’s capital for an international wildlife conference that kicks off on Thursday. The two-day meeting brings together governments, NGOs and activists to combat illegal wildlife trade and is being hosted in a country that has become a nexus for smuggling and consumption.

Wildlife trade monitoring group TRAFFIC, which campaigns to protect endangered animals and help governments catch those who trade in their parts, published a new analysis looking at 16 years of tiger seizure data from across the globe. They estimate an average of 110 tigers became victims of the trade each year since 2000. The study also illustrates the growing role breeding centers play in fueling the trade, especially in Southeast Asia.

Researchers singled out Thailand, Laos and Vietnam as among the world’s top countries for tiger farms. “These countries have clearly made little meaningful progress in controlling this source of supply,” Kanitha Krishnasamy, a co-author of TRAFFIC’s report said in a statement. “Any further stimulation of demand could have a more disastrous impact on wild tigers.”

Around 30 percent of tiger parts seized between 2012 and 2015 now come from captive tigers compared to just two percent between 2000 and 2003. Animal rights groups argue that by keeping demand for tiger parts going, farms simultaneously perpetuate the destruction of tigers in the wild.

Laos recently announced plans to close its tiger farms while Thailand has initiated investigations after a long tussle with a controversial Buddhist “tiger temple” that for years had been at the center of allegations of complicity in the trade. But both countries have a long history of corruption and policing crackdowns that rarely result in permanent successes on the ground.

Animal rights groups hope the Hanoi conference will pile pressure on governments to redouble efforts to stem the trade and close down farms. “Ending tiger farming would ease the pressure and help law enforcement agencies focus on the poachers and traffickers of wild tigers,” Michael Baltzer, from the World Wildlife Fund said.

Prince William, who has become a champion of endangered species in recent years, met Vietnam’s prime minister and vice president on Wednesday. Part of his mission is to “engage with a wide cross section of Vietnamese society in order to encourage the work of local people to stamp out the use of things like rhino horn,” according to a statement. He later headed to Lan Ong Street in Hanoi’s Old Quarter, a go-to strip for traditional medicine ingredients, where he met with a practitioner before speaking to a group of school children about wildlife conservation.