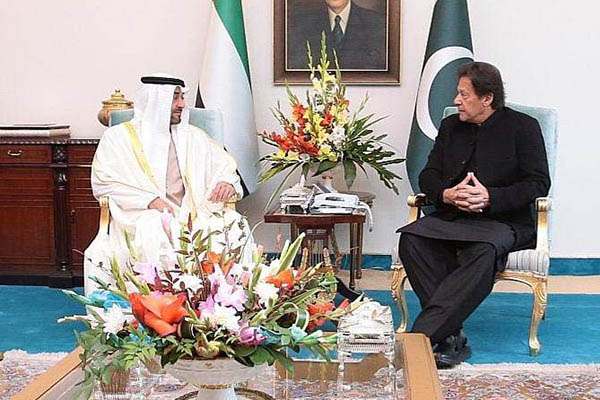 Launched on sidelines of daylong trip to Islamabad, the funds are intended to assist government’s efforts to stabilize economy

Launched on the sidelines of his daylong visit to Pakistan, the initiative under the Khalifa Fund for Enterprise Development would support economic projects and encourage “innovation in projects and support entrepreneurship, to assist the Pakistani government’s efforts to create a stable and balanced national economy that will help achieve the country’s sustainable development,” the statement added.

Earlier, Prime Minister Imran Khan personally received the crown prince upon his arrival at Nur Khan Airbase in Islamabad. This was the prince’s second visit to Pakistan in two years; he had last visited in January 2019.

During his visit, which was organized to highlight the “special relations” between Pakistan and the U.A.E., the crown prince and the prime minister held wide-ranging talks on bilateral, regional and international issues. Khan expressed satisfaction at the frequent, ongoing high-level visits between Pakistan and the U.A.E., as well as the steady development of cordial ties between the two fraternal countries. Underlining the strategic importance of the Pakistan-U.A.E. relationship, he stressed the importance of deeper economic engagement.

Khan highlighted the economic successes of his government, and apprised the crown prince of growing opportunities in Pakistan for foreign investment and trade and commercial engagement with key partner countries. He welcomed the U.A.E.’s interest in investing in Pakistan, assuring maximum facilitation.

The prime minister also highlighted the positive contributions of more than 1.6 million Pakistanis who reside in the U.A.E., and thanked Abu Dhabi and its people for their commitment to Pakistan’s socioeconomic development.

Khan also used the opportunity to update Crown Prince Zayed on India’s ongoing lockdown in India-held Kashmir, which has now lasted over 150 days. He noted that the discriminatory Citizenship Amendment Act (CAA) and the National Register of Citizens (NRC) were also yielding negative consequences. He said the global community must take steps to address Delhi’s oppression of Muslims; its escalation of tensions on the Line of Control; and to force a peaceful resolution of the Jammu and Kashmir dispute in accordance with United Nations Security Council resolutions.

Khan said Pakistan was working to ensure peace in Afghanistan through a reconciliation process. He said a peaceful, stable and prosperous Afghanistan was in the interest of not only Pakistan, but the whole region.

The two leaders also discussed the role of the Organization of Islamic Cooperation in advancing the cause of the Islamic Ummah.

The crown prince, meanwhile, underlined the strategic importance of U.A.E.-Pakistan relations, and extended cordial greetings for the brotherly people of Pakistan and good wishes for their accelerated development in the year 2020 and beyond. He also underlined the U.A.E.’s support for peace and stability in South Asia and peaceful resolution of all issues. He also appreciated Pakistan’s important role in the OIC.