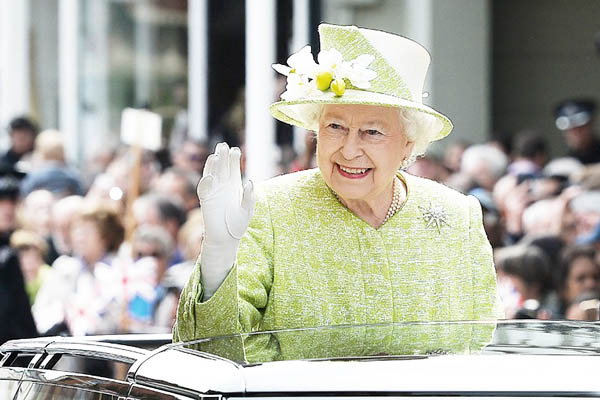 Well-wishers sang “Happy Birthday” to a smiling Queen Elizabeth II as she turned 90 on Thursday, celebrating the milestone by lighting a beacon and greeting cheering crowds in the streets.

The sovereign, who has been on the throne since 1952 and steered Britain through the decline of its empire, wore a lime green outfit and matching hat to accept presents, cards and flowers from the crowd in Windsor. The thousands of well-wishers spontaneously broke into song, some singing “Happy Birthday, dear Queenie.”

The queen’s eldest son and heir Prince Charles, 67, said “Mummy” was held in “love and affection” by the people she serves, as she lit a beacon outside Windsor Castle, west of London.

The sovereign, who last year overtook her great-great-grandmother queen Victoria to become Britain’s longest-serving monarch, later attended a lavish dinner hosted by Charles. More than 30 royals were among the 70-plus guests at the private black tie event.

In a speech in parliament, Prime Minister David Cameron said Britain was “uniquely blessed” to have her, calling Queen Elizabeth a “rock of strength.” Opposition socialist Labour leader Jeremy Corbyn, a rare republican in public life, added that, whatever “different views” people have about the monarchy, most believe the queen “has overwhelming support.”

Beacons were set ablaze across Britain and the Commonwealth that Queen Elizabeth symbolically heads, with Charles leading well-wishers in three cheers as she lit the first. “Your Majesty, Mummy, I find it very hard to believe you’ve reached your 90th year and I suddenly realized the other day that I’ve known you since you were 22 years old,” he said.

The Prince of Wales said the beacon represented “the love and affection in which you are held throughout this country and the Commonwealth.” He wished her “the most special and happiest of birthdays on this occasion. And long may you reign over us.”

As she met well-wishers in Windsor, she unveiled a new self-guided walking trail through the town, created by the Outdoor Trust.

Historian Hugo Vickers, the organization’s chairman, said: “She was terribly happy with the beautiful weather and the lovely occasion. She said it was a lovely day.” In a tweet, the monarch said: “I send my best wishes to those who are celebrating their 90th birthday. On this shared occasion, I send my warm congratulations to you.”

To mark the royal birthday, there were also military gun salutes around the country and crowds gathered outside Buckingham Palace. She was also presented with a three-tiered orange drizzle cake baked by Nadiya Hussain, winner of television cookery show The Great British Bake Off.

Royal officials released new pictures of the queen taken by U.S. celebrity photographer Annie Leibovitz. They were shot at Windsor Castle, where the monarch will on Friday host U.S. President Barack Obama and his wife Michelle.

In one photograph, the queen is pictured with four of her beloved dogs, while in another, she is surrounded by some of her youngest descendants, including all five of her great-grandchildren.

While still active, the head of state has scaled back her duties in recent years as Charles and his 33-year-old eldest son Prince William take a more prominent role.

The royals remain popular but some question what will happen when the queen—who is in good health, enjoying regular rides on her favorite pony and walking her corgi dogs—reaches the end of her life. In an editorial, The Times newspaper praised her as “a symbol of continuity and the best embodiment we have of a complex national identity.” But it warned the monarchy “will not long retain its popularity” if Charles, who often writes to ministers petitioning about issues close to his heart like the environment, is seen to breach the constitutional convention of neutrality as king.

The royal family is currently in a strong position. Some 68 percent of Britons think the monarchy is good for Britain, according to a YouGov survey last year. However, it has not always been on as sure a footing under Queen Elizabeth as it seems to be now.

It went through what the monarch described as an “annus horribilis” or horrible year in 1992 as her children’s marriages collapsed, and its popularity plunged after Diana died in a Paris car crash in 1997 and the queen was accused of reacting coldly. Advisers subsequently steered the royals towards a more modern image.