U.N. Chief Calls for Aid to Afghanistan as Conflict Spirals 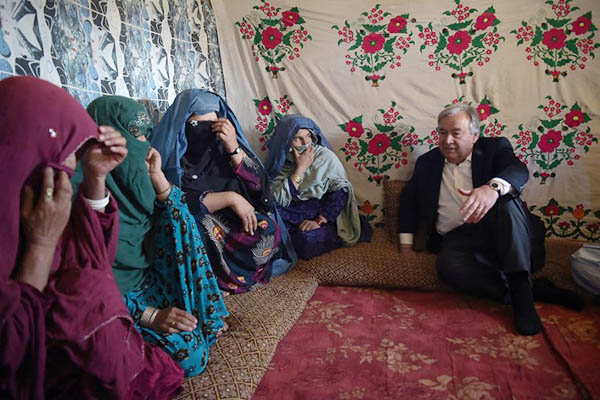 Sitting cross-legged with war-displaced women in a mud-brick settlement on Kabul’s outskirts, U.N. Secretary General Antonio Guterres on Wednesday called for increased humanitarian assistance and a political solution to end the conflict.

Guterres’ first visit to Afghanistan as U.N. chief comes amid spiraling insecurity as the country struggles to reabsorb masses of refugees being deported from Pakistan, Europe and Iran, joining hundreds of thousands of others uprooted by war. “We cannot leave these people alone,” Guterres said at the dusty, squalid camp, ringed by armed guards and sniffer dogs, where he met Afghan families who fled an expanding conflict with Taliban and Islamic State insurgents. “These are the most vulnerable people. The international community needs to come together… We need to increase humanitarian assistance to help them live with dignity.”

One of the women Guterres met was 30-year-old Kumri, a mother-of-four who lost her husband in a government battle with the Taliban in her native Kapisa province. “Shelter, clinic, school for my children,” said Kumri, who has been in the camp for two years, rattling off a list of demands to Guterres. “I am concerned about the future of my children. They are forced to beg.”

The humanitarian crisis engulfing Afghanistan has prompted international agencies, including the U.N., to appeal for emergency funding.

Hundreds of thousands of refugees have returned from Iran and, particularly, Pakistan, a regional nemesis cracking down on undocumented Afghan refugees. Many of them are stuck in limbo as their home districts are torn by insecurity. In a perfect storm, the European Union last year signed an agreement with Kabul to return Afghans whose asylum appeals are rejected, which could result in thousands of repatriations despite the violence.

More than 126,000 Afghan have fled their homes due to conflict this year alone, with displacement seen in 29 of the country’s 34 provinces, according to the U.N. “It is my deep belief that this war has no military solution… We need to have a political solution, we need to have peace,” Guterres said.

Kabul has been on edge since a massive truck bomb on May 31 killed more than 150 people and wounded hundreds in the city’s fortified diplomatic quarter, the deadliest attack in the Afghan capital since 2001. Just days later protesters incensed by the bombing clashed with police, prompting authorities to respond with live rounds, which left at least four people dead. Separately, suicide bombers tore through a row of mourners at the funeral for one of the protesters, killing at least seven more people.

The carnage has left the Afghan capital shaken, with protesters who have set up a sit-in camp close to the bombing site demanding the resignation of Ghani’s government.

Authorities have accused the Taliban-allied Haqqani network for the May 31 attack. Ghani appears keen to seek new U.N. sanctions against the militant movement if they do not resume peace talks. Insisting on an Afghan-led peace process, Guterres said any sanctions would be up to the U.N. Security Council, adding: “There is no good Taliban and bad Taliban.”