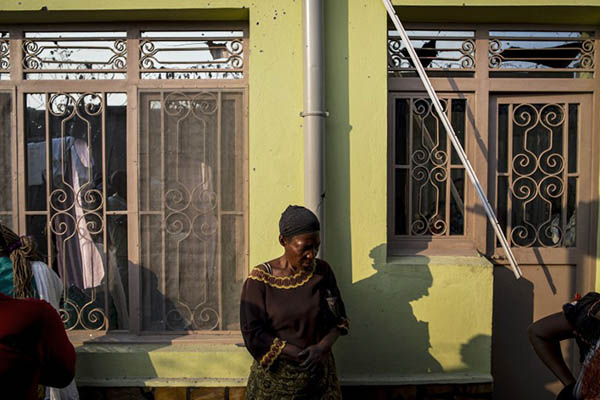 Rights violations in African nation have prompted the Security Council to demand intervention.

The United Nations moved Thursday to pull Burundi back from the brink of “possible genocide,” adopting a resolution that called for urgent talks and laid the groundwork for peacekeepers to be sent to stop the killings.

The U.N. Security Council unanimously adopted the French-drafted measure that strongly condemned the wave of killings, torture, arrests and other rights violations in the central African nation. The resolution requested that Secretary General Ban Ki-moon present options to the council within 15 days on “the future presence of the United Nations in Burundi” to help end the crisis.

U.N. officials are drawing up plans including rushing U.N. peacekeepers from the Democratic Republic of Congo to Burundi, or deploying a regional force under the African Union, if the violence spirals out of control. “We know that in the worst case what we are talking about is a possible genocide and we know that we need to do everything that we possibly can to prevent that,” said British Ambassador Matthew Rycroft, whose country chairs the Security Council this month. “The Security Council must fully embrace its role of prevention… and not let the genie of ethnic violence out of the bottle,” French Ambassador Francois Delattre told reporters.

Burundi descended into violence after President Pierre Nkurunziza launched a controversial bid to prolong his term in office in April. A wave of hate speech fueling attacks has drawn comparisons with Rwanda, where tensions between the same ethnic mix of Hutu and Tutsi exploded in 1994 and led to genocide.

At least 240 people have been killed in Burundi and more than 200,000 have fled the tiny landlocked nation. International alarm has been mounting after repeated appeals to Nkurunziza to enter into a dialogue with the opposition fell on deaf ears.

At a council meeting on Monday, Burundi’s Foreign Minister Alain Aime Nyamitwe said the “country was calm” with the exception of some pockets of the capital Bujumbura, where “small groups of criminals are active.”

The United Nations, European Union and African Union issued a joint call for a meeting between Burundi’s government and the opposition to be held outside the country, in Uganda or Ethiopia. “No effort can be spared to achieve an end to the violence and to foster a political solution,” said E.U. foreign policy chief Federica Mogherini, African Union chairman Nkosazana Dlamini-Zuma and U.N. Deputy Secretary General Jan Eliasson.

The U.S. ambassador to the U.N., Samantha Power, said a stronger push for political dialogue was “absolutely critical” to resolve differences after a Ugandan-led mediation failed to gain traction. “There must be a robust political process, and that process must be invigorated,” Power said.

Rycroft cited sanctions, a peacekeeping force and political pressure as some of the “tools” available to prevent mass atrocities.

The deployment of a U.N. force in Burundi would require the approval of Bujumbura authorities or a decision from the Security Council under a chapter 7 resolution, which authorizes the use of force. The council warned in the resolution that it was ready to consider “appropriate measures,” but a specific reference to “targeted sanctions” against Burundian leaders who incite attacks was removed in the final draft. The changes were made after Russia and some African countries argued that sanctions would not be helpful to encouraging a settlement.

Diplomats have raised concerns about Rwanda becoming embroiled in the conflict after President Paul Kagame accused Burundi’s leaders of carrying out “massacres” on their people.

The violence was sparked by Nkurunziza’s decision to stand for a third term in April, triggering opposition protests that were met with a brutal crackdown on political opponents, rights defenders and journalists. Nkurunziza was re-elected in July in a vote described as neither free nor credible by the U.N., compounding fears that the country could slide back into war.

Burundi’s war from 1993 to 2006 left some 300,000 people dead as rebels from the majority Hutu people clashed with an army dominated by the minority Tutsis.