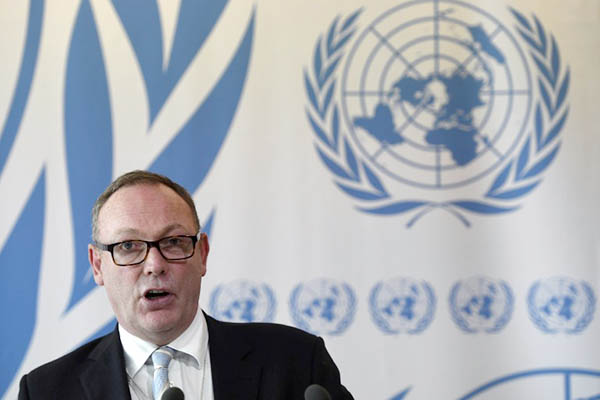 U.S. President Donald Trump’s defense of torture has set a precedent for other countries to follow, even if the U.S. does not act on it, a U.N. official said on Friday.

Trump’s support for waterboarding and other such techniques shows a “staggering level of ill-preparedness to govern,” said U.N. rights rapporteur Ben Emmerson. “We are in a situation where we have the first ever democratically elected head of state in the world who positively advocates torture,” he told reporters in Geneva. “And that is a state of affairs which lays down a gauntlet, it lays down a precedent. It enables other states to point… and to say well … Why shouldn’t we?”

Trump said days after his inauguration he thinks waterboarding and other techniques widely seen as torture “absolutely” work, but would defer to his CIA and Pentagon chiefs on whether to reinstate them. “That statement in itself, never mind whether it is implemented, in itself, has undermined the international prohibition on torture,” said Emmerson.

It has thereby “elevated the risk that suspects will be tortured producing unreliable, often useless intelligence,” and increasing the risk of terrorism in response, he added.

In a speech on Thursday, Emmerson—the U.N.’s rapporteur on protecting rights and freedoms while countering terrorism—had lashed out at Trump.

To hear the new U.S. leader “glibly extolling the virtues of torture as a weapon in the right against terrorism… was enough to make my blood run cold,” he said. “It shows a staggering level of ill-preparedness to govern.”

Re-introducing waterboarding “for reasons of jingoistic populism” would “fuel the resentments that stoke the risk of terrorism,” he said. “All this leaves one wondering whether lasting progress in this field is ever going to be possible,” he added.

The British U.N. official was speaking at the 34th session of the U.N. Human Rights Council, currently underway in Geneva.