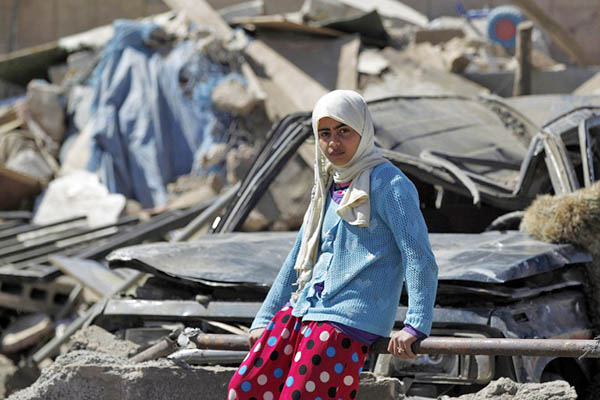 The United Nations has moved to put the Saudi-led coalition on its annual blacklist of child rights’ violators for the killing and maiming of children in Yemen, according to a draft report obtained by AFP on Wednesday.

After a similar move infuriated Saudi Arabia last year, the latest draft report placed the coalition on a separate section of the list of shame, which noted that measures had been taken to improve the protection of children.

“In Yemen, the coalition’s actions objectively led to the listing for the killing and maiming of children, with 683 child casualties attributed to this party, and, as a result of being responsible for 38 verified incidents, for attacks on schools and hospitals during 2016,” said the draft report.

Yemen’s government forces, pro-government militias, the Houthi rebels and Al Qaeda in the Arabian Peninsula (AQAP) were also blacklisted, but they have failed to take measures to protect children, the draft said.

The final report and the list, contained in an annex, are to be sent to the Security Council on Thursday before its public release on Friday. The council will hold a debate on children and armed conflict on Oct. 31.

Saudi Arabia leads an Arab military coalition that intervened in Yemen in 2015 to support the government of President Abedrabbo Mansour Hadi after Iran-backed Houthi rebels forced him into exile. The United Nations has listed Yemen as the world’s number one humanitarian crisis, with seven million Yemenis on the brink of famine and cholera causing more than 2,000 deaths.

Former U.N. chief Ban Ki-moon last year was forced into an embarrassing climb-down when he removed the coalition from the list after Saudi Arabia threatened to cut off funding to U.N. humanitarian programs. Ban had publicly complained that it was unacceptable for countries to “exert undue pressure” on the United Nations to avoid scrutiny of its actions.

Saudi Arabia denied that it had pressured Ban and has insisted that the coalition is respecting its obligations under international humanitarian law.

Another draft of the full report circulated in August said that 51 percent of the 683 child casualties in 2016 were attributed to the coalition. Nearly three-quarters of the 38 verified attacks on schools and hospitals in 2016 were carried out by air by the coalition, it said.

Human rights groups had pushed U.N. Secretary-General Antonio Guterres to return the coalition to the blacklist and send a strong message about the horrific toll that the war has taken on children.

Watchlist on Children in Armed Conflict, which groups leading human rights organizations, said it hopes that the draft listing will make it into the final report. “Watchlist has documented many instances of the coalition’s attacks in Yemen, and naming the coalition as responsible in the secretary-general’s annual report is hopefully the first step in holding it accountable and stopping these atrocities,” said Eva Smets, executive director of Watchlist.

The draft report indicates that Guterres “believes the Saudi-led coalition has taken positive measures, but we continue to receive disturbing reports of children dying from preventable diseases and the coalition’s bombs,” she added.

British-based Save the Children said adding the coalition to the list of shame should serve as a “wakeup call to every party in Yemen’s conflict—and countries that are supporting or arming them.”

To avoid a repeat of last year’s clash, Guterres this year presented the list in advance to Saudi Arabia and Yemen, and discussed measures that would allow the coalition to be taken off the list, a U.N. diplomat said.