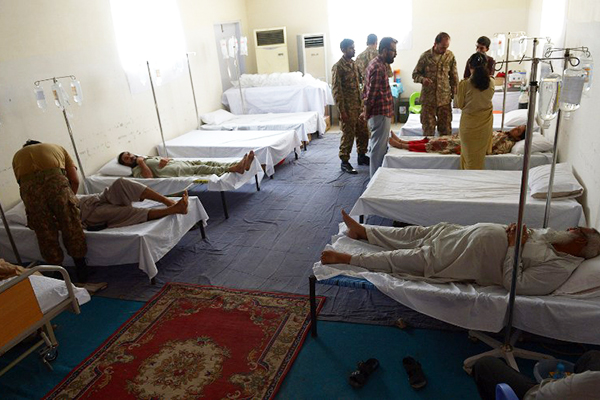 WHO, WMO create guidelines for challenges from climate change.

The U.N. urged countries on Wednesday to create preparedness systems to counter the health risks of heatwaves, as they become ever more frequent and intense, and dangerous, due to climate change.

For the first time, the U.N.’s World Health Organization (WHO) and its World Meteorological Organization (WMO) have joined forces to create guidelines for experts and authorities for how to lower the health risks of heatwaves like the ones currently scorching Asia and Europe.

“Heatwaves have emerged as an important hydrometeorological hazard and will remain so, given projected changes in the frequency of extreme heat events associated with human-induced climate change,” the text warns.

The main recommendation? To create heatwave-warning systems that highlight the health hazards and inform people what they should do to protect themselves. Such systems exist in a range of developed countries, like France, which introduced an alert system after it was hit hard by a 2003 heatwave that caused tens of thousands of deaths across Europe.

But elsewhere, such systems are uncommon, Diarmid Campbell-Lendrum of WHO said, voicing concern about places like Pakistan, where more than 1,200 people have died amid soaring temperatures in the south of the country. That crisis came a month after neighboring India suffered its own deadly heatwave which killed more than 2,000 people. “It is common to have weather forecasts tell people what the temperature is going to be, but in many countries they have not looked at what that means to health,” he said. The aim of the new guidelines, he said, was to “support countries to put into place this kind of system.”

WHO and WMO are calling on countries, even those not traditionally hit by extreme temperatures, to put in place heatwave-preparedness systems, allowing them to quickly alert the population to dangers and put hospitals on standby for an influx of patients suffering from heat-related ailments.

“Climate change is not only likely to bring about changes in the frequency and duration of heatwaves in ‘core’ heatwave regions but also an alteration of the geographical distribution of heatwave disasters,” WMO and WHO warned in their guidelines, based on several previous scientific studies. This means heatwaves may occur in places they have not happened previously, they said. They also warn that urbanization has exacerbated the problem, since cities tend to be hotter than elsewhere, putting vulnerable populations like the elderly and chronically ill more at risk.

Europe, which was caught off guard by the severity of the 2003 heatwave, is once again struggling with sweltering temperatures. The ongoing heatwave, enveloping Britain, Spain, France, Belgium, the Netherlands, Switzerland and northern Italy, is expected to last several days and has already seen the mercury rise as high as 40 degrees Celsius.

There is no universal definition of a heatwave—they are declared at varying temperatures depending on the usual climate in the region. In general though, they should be declared for a period of unusually high temperatures both during the day and at night lasting for at least two days, according to the WMO and WHO guidelines.