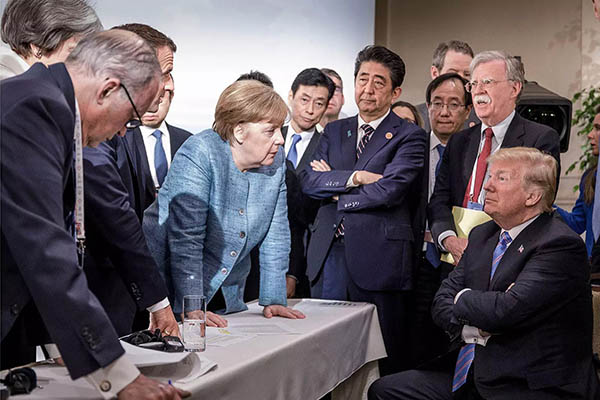 The U.S. blamed Canada on Sunday for the disastrous ending to the G7 summit, saying Prime Minister Justin Trudeau “stabbed us in the back,” while American allies held Washington responsible.

Just minutes after a joint G7 communiqué was published on Saturday in summit host city Quebec, President Donald Trump launched a Twitter broadside, taking exception to comments made by Trudeau at a news conference and saying he had instructed U.S. representatives not to endorse the joint communiqué.

Trump’s team kept up the barrage of criticism on U.S. media on Sunday.

Trudeau “really kinda stabbed us in the back,” top U.S. economic adviser Larry Kudlow said on CNN’s State of the Union. “He did a great disservice to the whole G7.”

U.S. trade adviser Peter Navarro, speaking on Fox News Sunday, reinforced that message. “There’s a special place in hell for any foreign leader that engages in bad-faith diplomacy with President Donald J. Trump and then tries to stab him in the back on the way out the door,” he said.

Kudlow sought to tie Trump’s reaction to the upcoming summit with Kim Jong-Un, saying the North Korean leader “must not see American weakness.”

Trump—who has a history of hair-trigger responses to slights—landed in Singapore on Sunday for the Tuesday summit meeting with Kim.

Before his departure from Canada the previous day, he tweeted: “Based on Justin’s false statements at his news conference, and the fact that Canada is charging massive Tariffs to our U.S. farmers, workers and companies, I have instructed our U.S. Reps not to endorse the Communique as we look at Tariffs on automobiles flooding the U.S. Market!”

German Chancellor Angela Merkel, late Sunday, called Trump’s revocation of support for the G7 joint communiqué “sobering and a little depressing,” while adding, in a rare one-on-one interview with ARD public television, “but that’s not the end” of the Group of Seven.

Trump in his tweet said Trudeau had “acted so meek and mild during our @G7 meetings only to give a news conference after I left saying that … he ‘will not be pushed around.’ Very dishonest & weak.”

Trudeau had told reporters that Trump’s decision to invoke national security to justify U.S. tariffs on steel and aluminum imports was “kind of insulting” to Canadian veterans who had stood by their U.S. allies in conflicts dating back to World War I. “Canadians are polite and reasonable but we will also not be pushed around,” he said.

Trudeau said he had told Trump “it would be with regret but it would be with absolute clarity and firmness that we move forward with retaliatory measures on July 1, applying equivalent tariffs to the ones that the Americans have unjustly applied to us.”

After Trump’s angry tweets, Trudeau’s office issued a brief response: “We are focused on everything we accomplished here at the G7 summit. The Prime Minister said nothing he hasn’t said before—both in public, and in private conversations with the president.”

Canada’s Foreign Minister Chrystia Freeland added that “Canada does not conduct its diplomacy through ad hominem attacks, we don’t think that it’s a useful or productive way to do business and perhaps we refrain particularly from ad hominem attacks when it comes to our relationship with our allies.”

On Sunday, Trudeau ignored the barbs from Trump’s advisers, tweeting a link to the G7 communique and hailing the “historic and important agreement we all reached.”

“That’s what matters,” he wrote.

The outburst against Trudeau, and by association the other G7 members, is only the latest incident in which Trump has clashed with America’s closest allies, even as he has had warm words for autocrats like Kim and Russia’s Vladimir Putin.

Reneging on the commitments agreed in the communiqué showed “incoherence and inconsistency,” it said in a statement.

When Trump left Quebec, it was thought that a compromise had been reached, despite the tension and the determination of European leaders Macron and Merkel to push back against the U.S. president’s protectionist policies.

Officials from European delegations quickly leaked copies of the joint statement, and it was published online moments before Trump tweeted. On board Air Force One, an AFP reporter was told that Trump had approved the agreement, only to be told later of the tweets. A senior U.S. administration official said that Trump had been angered by Trudeau’s comments.

The joint communiqué that was thrashed out over two days of negotiations in Canada vowed that members would reform multilateral oversight through the World Trade Organization (WTO) and seek to cut tariffs. “We commit to modernize the WTO to make it more fair as soon as possible. We strive to reduce tariff barriers, non-tariff barriers and subsidies,” it said, reflecting the typical language of decades of G7 statements.

But Trump had already said he would not hesitate to shut countries out of the U.S. market if they retaliate against his tariffs. “The European Union is brutal to the United States… They know it,” he insisted in his departing news conference. “When I’m telling them, they’re smiling at me. You know, it’s like the gig is up.”

From Singapore early Monday, Trump continued to tweet that the United States protected NATO countries “these same countries that rip us off on Trade … Not fair to the PEOPLE of America!”

European officials said Trump had tried to water down the language in the draft communiqué on the WTO and rules-based trade. In the end, that language stayed in and it was only on climate change that no consensus was reached.