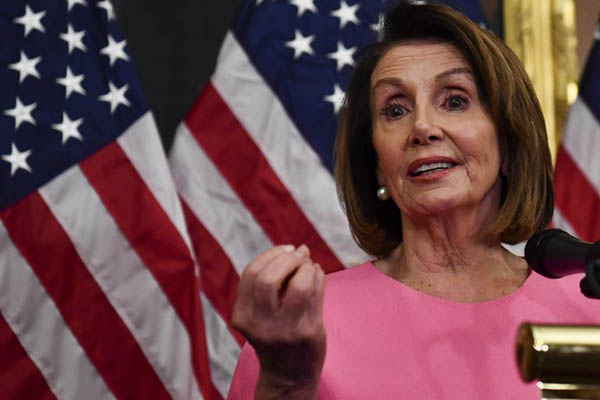 Funds to be used for facilities along U.S.-Mexico border amid growing crisis of migrant children living in squalid conditions

One day after the Senate passed the administration-backed measure, the House of Representatives followed suit with a bipartisan vote of 305 to 102 that sends the bill to the president’s desk.

The emergency money would provide a much-needed financial injection to facilities along the U.S.-Mexico border, amid a growing crisis that has seen migrant children housed in squalid conditions, sometimes with no soap, toothpaste or showers, little adult supervision and insufficient food.

The measure funds agencies like the Department of Homeland Security and the Health and Human Services Department, which have been overwhelmed by an influx of migrants, mostly from Central America, arriving at the southern border.

The two U.S. political parties had been battling over border funding for months.

In the most recent squabble, Pelosi and Democrats had wanted additional language that would ensure better protections of migrant children and place restrictions on the funding in a bid to keep the Trump administration in check. But she conceded to Republicans when her caucus failed to move the needle.

“The children come first. At the end of the day, we have to make sure that the resources needed to protect the children are available,” Pelosi said in a statement to Democrats before the vote. “As we pass the Senate bill, we will do so with a battle cry as to how we go forward to protect children in a way that truly honors their dignity and worth.”

Republicans insisted that the measure include tens of millions of dollars in overtime pay and other wages to personnel at the border, authority to deploy military personnel there, and authority to investigate human trafficking. “Common sense prevailed over partisanship in Congress today,” top House Republican Kevin McCarthy said, as he demanded the two parties now come together to “fix our broken immigration system.”

The strain on the border mushroomed into a crisis in recent weeks as migration numbers surged. Emotions ran high this week when a photograph emerged showing the bodies of a Salvadoran man and his infant daughter in the Rio Grande River who had drowned trying to enter the United States illegally.

Ninety-five Democrats opposed the bill, including congresswoman Pramila Jayapal, who argued that the Senate-crafted measure does not contain “sufficient guardrails” for improving care, and allows the Pentagon to build tent camps for migrant children on military sites. It also “continues to provide more funding for the deportation forces of the Immigration & Customs Enforcement agency and allows a lawless administration to evade basic standards of care for children,” she said.