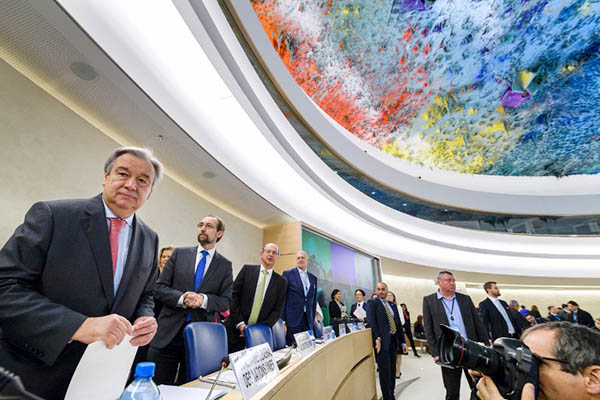 Latest statement from senior U.S. officials fuels belief that America might be considering withdrawing from council.

Many actions taken by the U.N. Human Rights Council “contradict” American values, a senior U.S. official said on Wednesday amid speculation that Washington might quit the body over its treatment of Israel.

The 47-member council opened its main annual session in Geneva on Monday with eyes fixed on the U.S. seat, occupied for the first time by an envoy from President Donald Trump’s administration. Media reports have said that Trump’s government is considering withdrawing from the council before the U.S. term expires in 2019.

The speech by Deputy Assistant Secretary of State Erin Barclay did little to dampen worries that Trump’s “America First” doctrine would limit the U.S.’s leadership role on the council.

Referring to “life, liberty, and the pursuit of happiness”—ideals voiced in the Declaration of Independence—Barclay said Washington’s “commitment to fundamental human rights is stronger than ever.”

“Regrettably, too many of the actions of this council do not support those universal principles,” she said, adding that “indeed, they contradict them.”

Barclay said the U.S. was “troubled” by what she called the council’s “obsession” with Israel, which has been the target of more resolutions than any other state.

Washington’s “future engagements” with the rights council will be based on “reform,” she said, including steps to “move away from its unbalanced and unproductive positions.”

Human Rights Watch on Monday said a decision to quit the rights council would be “a misguided and shortsighted step.” It noted that the council’s major successes—including inquiries into violations in Syria and North Korea—all required leadership from Barack Obama’s administration, which held a seat on the council for most of his eight-year tenure.