U.S. Not Ready to Negotiate Directly With Taliban: NATO 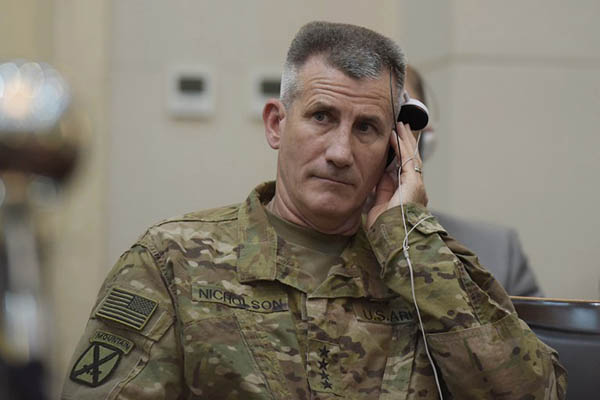 NATO’s Afghanistan mission denied on Monday reports that its commander has said America is ready to join direct talks with the Taliban.

U.S. General John Nicholson spoke with Afghan officials in Kandahar, where he reportedly said the U.S. was “ready” to talk to the Taliban—a shift from the long-held position of Kabul needing to lead any peace process.

In a statement, Nicholson said his comments had been mischaracterized and that he was merely reaffirming remarks by U.S. Secretary of State Mike Pompeo, who in June said the U.S. is prepared to “support, facilitate and participate” in eventual peace talks.

“The United States is not a substitute for the Afghan people or the Afghan government,” Nicholson said in the statement released by NATO’s Resolute Support mission.

Resolute Support spokesman Lieutenant Colonel Martin O’Donnell added that the U.S. is exploring “all avenues” to advance a peace process. “But this remains an Afghan-led process,” O’Donnell said.

The New York Times on Sunday reported that the administration of President Donald Trump had told its top diplomats to seek direct talks with the Taliban.

The insurgent group has long maintained it wants to talk only with the U.S., while Washington has insisted the Afghan government be involved.

The Taliban has been rampant in recent years. Trump in 2017 reluctantly agreed to commit thousands more U.S. troops to the 17-year-old fight. But Afghan security forces have been struggling to beat back the insurgents amid desertions, killings and corruption.