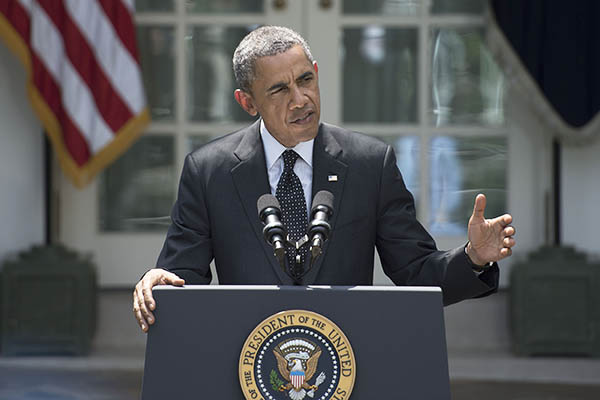 Around 9,800 soldiers will remain deployed in the war-torn country through 2015 with a full withdrawal due by the end of 2016.

U.S. forces will complete their withdrawal from Afghanistan by the end of 2016, President Barack Obama said Tuesday, unveiling a plan to end America’s longest war 15 years after the September 11 attacks.

“We’re finishing the job we started,” Obama said, as he outlined the end of U.S. involvement in a conflict which began when American-led forces invaded Afghanistan to oust the Taliban and hunt Al Qaeda leader Osama bin Laden after the 2001 attacks on New York and Washington. U.S. combat operations would draw to a close at the end of 2014, meaning U.S. troops would no longer patrol Afghan cities, towns or valleys from next year, Obama said.

The drawdown relies on Afghanistan signing a long-delayed Bilateral Security Agreement (BSA) laying out the terms and conditions of the U.S. military presence in the country after this year. Afghanistan’s outgoing president Hamid Karzai has refused to sign the agreement, but both of the candidates vying to be his successor in next month’s run-off vote—Ashraf Ghani and Abdullah Abdullah—have said they will sign the deal. “So I’m hopeful we can get this done,” Obama said.

“The bottom line is, it’s time to turn the page on more than a decade in which so much of our foreign policy was focused on the wars in Afghanistan and Iraq,” he said.

Obama sharply stepped up U.S. involvement in Afghanistan after his 2008 election victory, boosting troop numbers there even as he brought the parallel U.S. operation in Iraq to a close. He also massively increased the number of covert U.S. drone strikes on militant targets in neighboring Pakistan, and ordered the May 2011 U.S. commando raid that killed bin Laden there.

As he announced the end of US involvement in a conflict that has claimed the lives of more than 2,300 US personnel, Obama said future security would hinge on the Afghans themselves. “We have to recognize Afghanistan will not be a perfect place,” he said. “And it is not America’s responsibility to make it one. The future of Afghanistan must be decided by Afghans.”

U.S. troops remaining in Afghanistan after 2014 would be available to train Afghan forces while supporting counter-terrorism operations against Al Qaeda remnants, Obama said.

The withdrawal of U.S. troops from Afghanistan would herald a “new chapter in American foreign policy,” Obama said. “[It] will allow us to redirect some of the resources saved by ending these wars to respond more nimbly to the changing threat of terrorism,” he said. “I think Americans have learned that it’s harder to end wars than it is to begin them.”

A NATO spokeswoman, Oana Lungescu, said Obama’s statement was consistent with plans being laid by the Atlantic alliance for a training and support mission beyond the end of the year. “I expect NATO defense ministers will discuss the completion of our ISAF combat mission and preparations for the new mission when they meet in Brussels next week,” she said.

Obama made an unannounced visit to U.S. forces in Afghanistan on Sunday, spending four hours at Bagram, one of the secure bases that will house support troops after their combat mission ends.