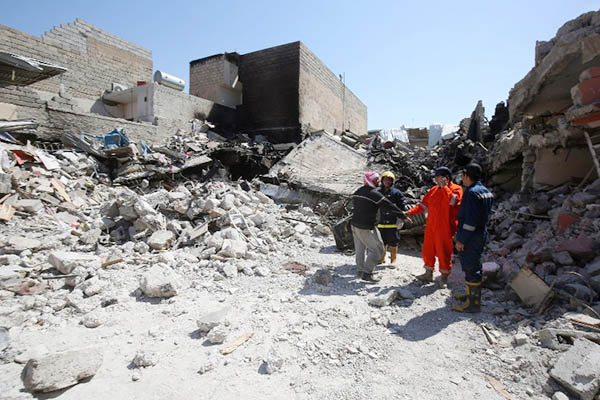 A Pentagon investigation has concluded that at least 105 civilians died in an anti-I.S. strike in the Iraqi city of Mosul in March, officials said on Thursday, but they blamed the toll on a secondary explosion of jihadist munitions.

A U.S. aircraft delivered a single precision-guided bomb into a building in west Mosul on March 17, with the aim of killing a pair of snipers on the second story of the structure in the al-Jadida neighborhood, which at the time was under Islamic State control. But the bomb also caused a large cache of I.S. explosives to detonate, leading to the catastrophic collapse of the building that had civilians sheltering downstairs, officials said.

“The secondary explosion triggered a rapid failure of the structure which killed the two ISIS snipers, 101 civilians sheltered in the bottom floors of the structure and four civilians in the neighboring structure to the west,” said U.S. Air Force Brigadier General Matt Isler, the lead investigator.

Isler said another 36 civilians who are “believed to be connected” to the building remained unaccounted for, but they had likely fled the area shortly before the strike. He said he was “very confident” in the final toll. It was the single deadliest incident for civilians stemming from a coalition strike since anti-I.S. operations in Iraq and Syria began nearly three years ago.

The United States had previously only acknowledged that it “probably” had a role in the civilian deaths.

The investigation comes amid broader claims that U.S. forces under President Donald Trump are killing more civilians as the military fulfills a plan to “annihilate” the Islamic State group.

The Pentagon denies this and says its rules of engagement remain unchanged and insists its precision-targeting abilities are the best in the world.

Officials say the U.S. takes every precaution to avoid hitting civilians, including by aborting missile strikes at the last moment if a civilian unexpectedly wanders into the target zone. “Our condolences go out to all those that were affected,” said Major General Joe Martin. “The coalition takes every feasible measure to protect civilians from harm. The best way to protect civilians is to defeat ISIS.”

No condolence payments have been made, Isler said, though such a move has not been ruled out.

According to Isler, Iraqi counterterrorism service (CTS) troops had been moving into the al-Jadida neighborhood in west Mosul when they came under fire from the I.S. snipers.

Mosul was a former I.S. bastion but the jihadists now only control about 10 percent of the city.

Bad weather had kept surveillance drones from gathering video of the area for two days, and CTS and coalition forces—not knowing civilians were in the building—ultimately called in a strike, Isler said.

The precision-guided bomb selected—a GBU-38 carrying 192 pounds of explosives—was rigged to cause only localized damage to the building, but it ignited a large amount of ordnance which, unbeknownst to the coalition, I.S. fighters had previously placed inside. “Post-blast analysis detected residues common to explosives used by ISIS, but not consistent with the explosive content of a GBU-38 munition,” Central Command said in a statement. “Engineering and weapons analysis indicates that the GBU-38 should have resulted in no more than 16-20 percent damage to the structure, localized to the front of the second floor.”

Officials said I.S. may have deliberately rigged the building to explode and then used the snipers to intentionally provoke an airstrike.

As of the most recent Centcom official tally, at least 352 civilians had been killed since the beginning of the bombing campaign against the Islamic State group in Iraq and Syria nearly three years ago. Airwars, a London-based collective of journalists and researchers that tracks civilian deaths in Iraq and Syria, claims a minimum of 3,350 people have died in coalition strikes.