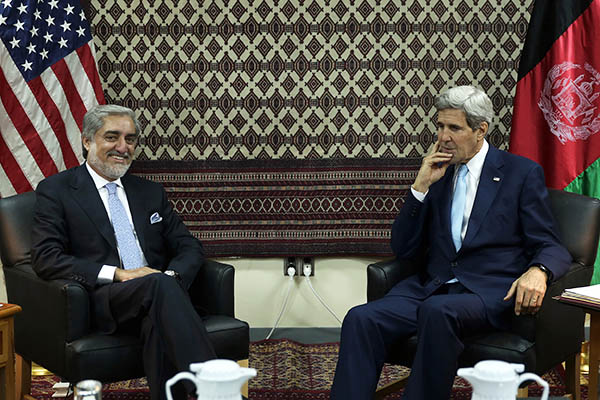 Washington wants a new president in place ahead of September’s NATO summit, which will deliberate on future support for Kabul.

U.S. Secretary of State John Kerry will hold talks in Kabul on Friday to pressure Afghanistan’s presidential candidates into resolving disputed elections and installing the winner by the end of this month.

Allegations of massive fraud in Afghanistan’s June vote tipped the country into a political crisis, with the United Nations voicing fears that the contested outcome could revive the ethnic divisions of the 1990s civil war.

Kerry last visited Kabul last month to negotiate a deal in which poll rivals Ashraf Ghani and Abdullah Abdullah agreed to an audit of all eight million ballots, and for the winner to form a national unity government. But the deal soon faltered due to further disagreements between the candidates, and no date has yet been set for the delayed presidential inauguration—an impasse that risks worsening instability as NATO troops withdraw.

Kerry is due to meet the U.S. ambassador on Friday followed by an audience with outgoing Afghan President Hamid Karzai. A press conference is expected later in the afternoon.

The latest visit comes as Washington responds to another legacy of its foreign policy in the Muslim world, with U.S. President Barack Obama overnight authorizing airstrikes on Islamist extremists in Iraq. Obama said the strikes were necessary to prevent a “genocide” by Islamic State militants who have targeted Iraq’s minorities since seizing vast swathes of the country’s northern and western regions.

The clock is now ticking for a new Afghan president to be in office before the end of this month ahead of a NATO summit on Sept. 4-5, when member states will decide on future finance and support for the war-torn country. “We would like to see the inauguration ideally by the end of the month,” said a U.S. official traveling with Kerry. “It’s important for a new president to be able to go to NATO and ask for these commitments, including continued ANSF [Afghan National Security Forces] costs. It’s in all of our interests for that to happen. That is still the goal and we are all doing everything possible to ensure that it can stay the goal.”

According to preliminary election results, former World Bank economist Ghani easily won the run-off election. But Abdullah, a former anti-Taliban resistance fighter, alleged massive ballot box stuffing and refused to accept the result, with his supporters urging him to set up a “parallel government.”

Karzai, who has ruled since the Taliban were ousted in 2001, has also called for his successor to be named by the end of the month, saying the delay is damaging Afghanistan’s fragile security and economy.

Taliban insurgents have launched new operations in the south and east in recent months, and violence is increasing across the country according to several independent reports. U.S.-led foreign troop numbers have declined from a peak of 150,000 in 2012 to just 44,300 now, and NATO’s combat mission in Afghanistan will end in December after 13 years of fighting that has failed to defeat the Taliban.

The new president is expected to sign a security deal that will allow a follow-up NATO “training and advisory” mission, with about 10,000 U.S. troops staying into 2015.

Kerry held meetings with both candidates late Thursday to try to hammer out a schedule for the election winner to be finally declared. Only about 5,000 of the 23,000 ballot boxes have been audited so far, and the process has often ground to a halt due to arguments over individual ballot papers.

Kerry’s visit was “to encourage both candidates to accelerate the audit process. We really want to see it moving faster,” the U.S. official said.

Western nations that have sent troops and billions of dollars worth of aid to Afghanistan since 2001 had hoped a smooth transition of power would be a benchmark of progress made since the austere Taliban era. The dangers of international military intervention were underlined on Tuesday when a rogue Afghan soldier shot dead a U.S. general at an army training center in Kabul, wounding more than a dozen others including a senior German officer.