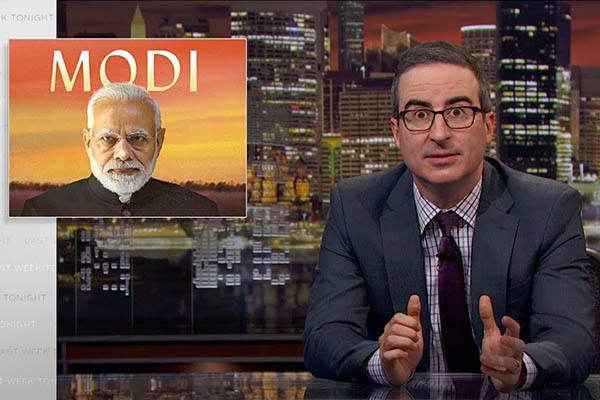 An episode of an American current affairs TV show that criticized India Prime Minister Narendra Modi and his government’s authoritarian policies has been blocked in India by the local platform that broadcasts it, Indian media reported on Wednesday.

The latest episode of Last Week Tonight with John Oliver, a show broadcast on HBO in the U.S. but delivered to Indian audiences via Hotstar, a local platform run by the Walt Disney Company, was unavailable for Indian audiences this week. The likely reason was the main story of the episode, which examined the religious persecution of minorities in India, which has worsened in the years since Modi came into power.

Linking the story to U.S. President Donald Trump’s trip to India, comedian John Oliver examined the recent nationwide protests that have erupted over a controversial citizenship law, and posited that it was unlikely that the U.S. leader would comment on them—a prediction that proved true as Trump hailed Modi for a “united” India, even as violent clashes erupted between predominantly Hindu and Muslim groups mere miles from the site of his press conference.

Traditionally, the Emmy-winning Last Week Tonight with John Oliver airs at 6 a.m. every Tuesday in India. However, subscribers this week found that only older episodes were available and the new episode had not been made available to them. Bloomberg Quint reported that a Hotstar representative had not responded to calls for a comment, while a representative for India’s Information and Broadcasting Ministry said the government was not involved.

“While Modi may have charmed … the world, and our current president, in India he is an increasingly controversial figure because his government has pursued a steadily escalating persecution of religious minorities,” Oliver said in the episode, which is available globally on the show’s YouTube channel. “The only glimmer of hope here is that for perhaps the first time in Modi’s whole career, his actions are creating a massive and sustained backlash,” he added.

This isn’t the first time a multinational company has had to restrict content in territories run by leaders seen as authoritarian. Last year, Amazon removed an episode of the TV show Madam Secretary from India over references to Hindu nationalism and India-Occupied Kashmir. Similarly, Netflix had to pull an episode of Hasan Minhaj’s Patriot Act from Saudi Arabia after it criticized Crown Prince Mohammed bin Salman.