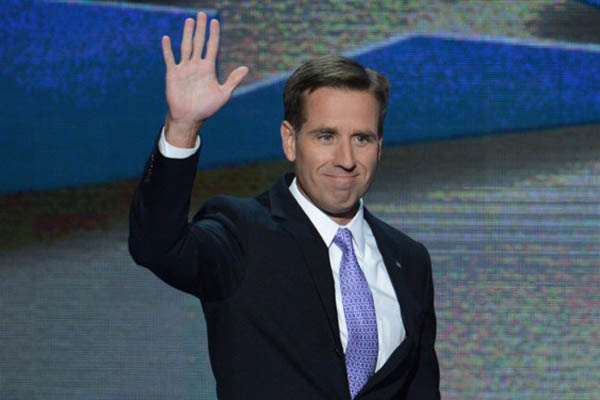 Beau Biden, the eldest son of U.S. Vice President Joe Biden and a two-time attorney general for Delaware, has died of brain cancer, his family announced Saturday. He was 46.

Beau Biden, who had served in Iraq as a lawyer with the Delaware Army National Guard, had been undergoing treatment at the Walter Reed Medical Center just outside Washington. “He battled brain cancer with the same integrity, courage and strength he demonstrated every day of his life,” the vice president’s family said in a statement. “The entire Biden family is saddened beyond words. We know that Beau’s spirit will live on in all of us—especially through his brave wife, Hallie, and two remarkable children, Natalie and Hunter.”

Beau was a popular Democrat in his East Coast state of Delaware and had once been expected to follow his father onto the national political stage. He joined the National Guard in 2003 as a judge advocate general, or military lawyer, and deployed to Iraq in 2008 as his father was campaigning for the vice presidency as Barack Obama’s running mate.

“He didn’t have to go,” U.S. Secretary of State John Kerry wrote before suffering a cycling accident in France on Sunday. “He didn’t have to do any of it. But he was filled with a sense of honor, duty, and humility—to the core. He was a class act.”

Beau briefly considered running for the U.S. Senate to take the seat vacated when his father became vice president after the 2008 election, but he ultimately decided to continue working as Delaware’s attorney general.

Obama paid homage late Saturday, praising Beau’s commitment to his family. “Like his dad, Beau was a good, big-hearted, devoutly Catholic and deeply faithful man, who made a difference in the lives of all he touched—and he lives on in their hearts,” Obama said in a statement. “But for all that Beau Biden achieved in his life, nothing made him prouder; nothing made him happier; nothing claimed a fuller focus of his love and devotion than his family. Just like his dad,” the president added.

The death marks another devastating loss for Joe Biden, whose first wife and infant daughter were killed in a car accident as they were going Christmas shopping in 1972. Beau and his younger brother Hunter, who were also in the car, were seriously injured but survived.

According to the New York Times, Beau suffered what was described as a mild stroke in 2010. He went on to receive treatment in Texas and in 2013 had a small lesion removed from his brain.

Some Delaware politicians as recently as this year thought Beau would run for governor in 2016 but his health declined in recent weeks and he was sent to Walter Reed on May 20, the Times reported.

Tributes poured in Saturday after news of the death broke.

“My heart is broken for the family of Beau Biden—a wonderful man who served his country with devotion and lived his life with courage,” Hillary Clinton wrote on Twitter. Jeb Bush, the likely 2016 Republican presidential candidate, tweeted: “Saddened by the news of Beau Biden’s passing. My prayers are with the Vice President, Dr. Biden and the whole family.”