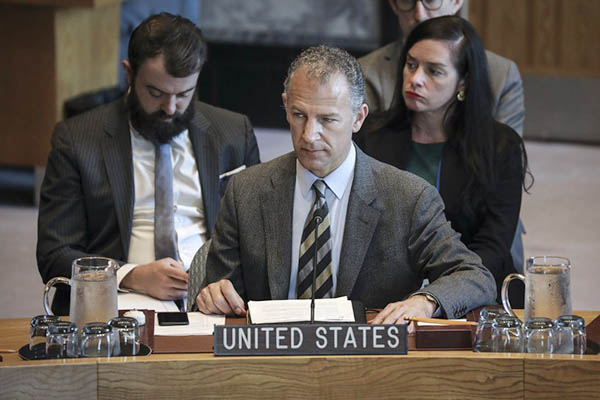 Tehran’s mission to the U.N. issues statement that U.S. sanctions, military build-up in the Gulf are threatening peace and security

The United States called on Thursday for the U.N. Security Council to confront a “clear threat” posed by Tehran, after Washington said Iran was behind an attack on oil tankers in the Gulf of Oman.

The council met behind closed doors to hear U.S. acting Ambassador Jonathan Cohen present a briefing on Washington’s assessment that Iran was responsible for the suspected attack on two tankers in the strategic sea lane.

The attacks, which came a month after a similar incident targeting four tankers off the coast of the United Arab Emirates, “demonstrate the clear threat that Iran poses to international peace and security,” Cohen said. “I’ve asked the Security Council to remain seized of the matter and I expect that we will have further conversations about it and how to respond in the days ahead,” he added.

Iran’s mission to the United Nations responded in a statement that it was U.S. sanctions and its military buildup in the Gulf that was “the most significant threat to peace and security” in the region. “The U.S. and its regional allies must stop warmongering,” a statement from the Iranian mission said.

Washington’s assessment that Iran was the culprit was not shared by other council members, who noted that there was no clear evidence linking Tehran to the attacks, diplomats said.

Kuwait’s Ambassador Mansour al-Otaibi said many council members called for an investigation to determine the facts. “We would like to know who was behind this incident,” he told reporters after the meeting.

The latest incident came amid spiraling tensions between Tehran and Washington, which has pointed the finger at Iran over earlier tanker attacks in May. U.N. Secretary-General Antonio Guterres said the facts should be established but warned against stoking conflict.

“If there is something the world cannot afford, it is a major confrontation in the Gulf region,” he told an earlier council meeting on U.N. cooperation with the Arab League.

The Norwegian Maritime Authority said three explosions were reported Thursday on board the Norwegian-owned tanker Front Altair after it was “attacked,” along with the Japanese-owned ship Kokuka Courageous.

On May 12, four oil tankers—two Saudi, one Norwegian and one Emirati—were damaged in still unexplained attacks in the Gulf of Oman off the United Arab Emirates.

The U.A.E. last week said initial findings of its investigation pointed to the likelihood that a “state actor” was behind the bombings, but did not specifically blame Iran.

The preliminary findings were presented to the council, which may consider a response. These showed that it was “highly likely” that four Limpet mines, which are magnetically attached to a ship’s hull, were used in the attacks, placed by trained divers deployed from fast boats.