U.S. Will Ensure ‘I.S. Does Not Rear its Ugly Head Again’ 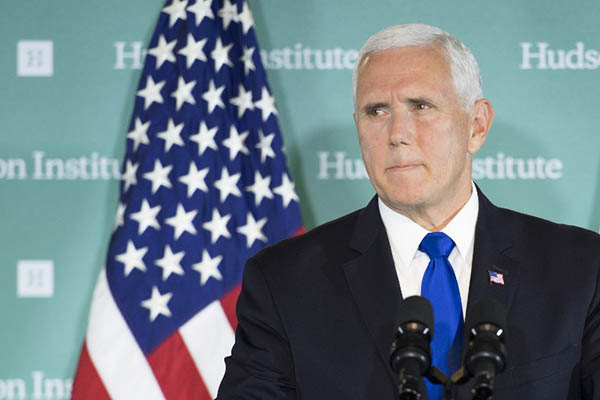 Vice President Mike Pence said the United States would fight to ensure the defeat of the Islamic State movement but reiterated plans to pull troops out of Syria after an attack there killed U.S. service members.

“We’ll stay in the region and we’ll stay in the fight to ensure that ISIS does not rear its ugly head again,” Pence, using another name for I.S., told a gathering in Washington of U.S. ambassadors stationed around the world. “We will protect the gains that our soldiers and our coalition partners have secured,” he told the meeting at the State Department.

Despite the pledge of support, Pence double-downed on President Donald Trump’s controversial declaration in December that the United States would pull all of its 2,000 troops from Syria. “Thanks to the leadership of this commander-in-chief and the courage and sacrifice of our coalition partners, we’re now actually able to hand off the fight against ISIS in Syria to our coalition partners and we are bringing our troops home,” he said. “The caliphate has crumbled and ISIS has been defeated,” he said, without referencing the attack earlier Wednesday.

The U.S.-led coalition said U.S. service members were among the dead in the suicide attack in the flashpoint city of Manbij, the first there against the international forces in 10 months.