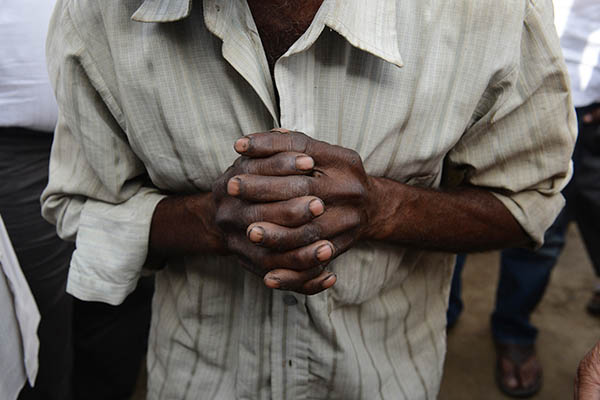 The father of one of the victims prays for justice. Chandan Khanna—AFP

Families of girls say they have no faith in local police.

The leader of India’s Uttar Pradesh state on Saturday asked federal police to investigate the brutal gang-rape and murder of two girls found hanging from a mango tree, amid mounting public anger over their deaths.

Uttar Pradesh Chief Minister Akhilesh Yadav requested a Central Bureau of Investigation (CBI) probe into the killings of the two low-caste cousins, whose bodies were discovered Wednesday. Yadav’s call came as police said five men were arrested over the gang-rape and murder of the girls, aged 14 and 12, in the impoverished Katra Shahadatganj village in Badaun district of Uttar Pradesh in northern India.

“The chief minister has decided to recommend a CBI probe into Badaun incident as demanded by family members,” an official statement said.

However, the families of the girls said earlier they had no faith in the impartiality of local police, accusing them of being “hand-in-glove” with the killers.

Television footage of the girls’ bodies hanging from the fruit tree fanned public anger over the case, the latest in a string of rapes in India to stir national outrage and international criticism. Preliminary murder and gang-rape charges were filed against three men while two policemen face accusations of being criminal accessories, said Badaun district police superintendent Atul Saxena.

“Rape of both girls has been confirmed. Cause of death was asphyxia,” he said. “These men [accused of murder] first raped the victims and then hanged them,” Saxena said. Both girls “were still alive when they were hanged,” added Saxena.

Yadav drew public ire on Friday for replying to reporters who asked him about a sharp rise in rape cases in the state with the words: “It’s not as if you faced any danger.”

The relatives of the cousins said police could have “saved” the girls but refused to help when because they were low caste. “She was my everything, my world—and now my world has come to an end,” the grief-stricken father of one victim said. The alleged attackers were from a higher caste than the girls.

There is a long history of women and girls from India’s lower castes—especially those who are Dalits, previously known as “untouchables”—being sexually abused by people from higher castes.

“These policemen didn’t act for hours when they could have saved two young lives. Why is caste everything?” asked the father, who cannot be named for legal reasons.

“The incident underscores the wave of violence that is being seen against women whether in India, Pakistan or gender-based violence in general,” Dujjaric told the Press Trust of India.

India toughened sex assault laws following the fatal December 2012 gang-rape of a student on a bus in New Delhi which sparked nationwide protests, but the move has done little to stem the tide of sex attacks. According to Indian government statistics, a rape occurs every 22 minutes but activists say the figure is conservative as many rapes go unreported in the nation of 1.2 billion where sexual crime victims are often publicly shamed.

The father said his daughter and her cousin were attacked Tuesday night when they went to the fields to relieve themselves as their house had no toilet. The family reported the girls’ disappearance to police who told relatives they were with an upper-caste village man and would be back “in a couple of hours,” the father said. Then they received a call saying their daughters’ bodies were hanging from a tree.

“This was nothing but plain murder and [caste] conspiracy,” he said. “The cops were totally hand-in-glove in getting our daughters killed,” said the father of the other victim.