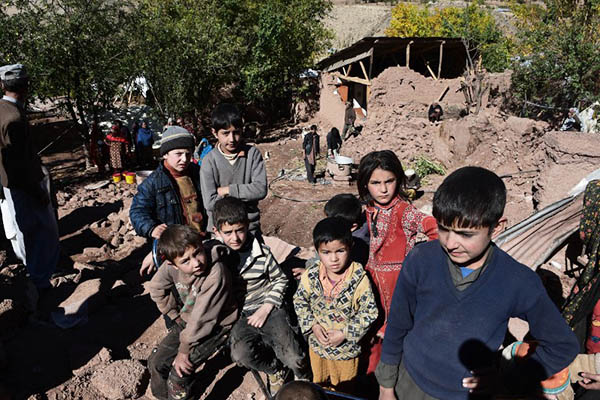 Residents of Chitral say their biggest concern after Monday’s tremors is surviving the cold.

Seven-year-old Noreen was playing with a doll on her house’s veranda in Chitral’s Juhoor region when Monday’s powerful 7.5 magnitude earthquake struck. Grabbing her four-year-old brother, she ran out of the house, followed by her mother carrying their infant sibling. “Don’t look back or stop. Just run away from the house!” her mother yelled at her, terrifying the young girl. In her panic, she dropped her doll. A few minutes later, the rubble of their now collapsed home had crushed it.

“Will the government rebuild our home for us?” she asked her parents as they spoke with Newsweek. Her laborer father, Mohammad Wazeer, merely shook his head as he looked at the tent they have been living in for the past three days. “It is getting colder by the day. I have a six-month-old infant. We have yet to be visited by any rescue team. I don’t know how we’ll survive.”

Chitral, near Pakistan’s border with Afghanistan, was among the districts hit hardest by Monday’s earthquake, which originated across the border in the Hindu Kush mountain range. Located at a depth of 213.5km, the quake’s impact was mercifully contained, but for people in Pakistan’s northern areas, this information is little relief. After Monday’s tremors, they have experienced aftershocks of magnitudes measuring up to 4.8 and are living in constant fear of landslides taking out the few remaining buildings, roads, and power and communications lines.

“Our homes are [built] on mountains with peaks above and rivers below. If there’s a landslide, God forbid, we are directly in its path,” says Huraira Bibi, a resident of Chitral’s Roji village. Amir Wali, of nearby Madashil Karimabad, is equally worried. “We can’t live in our homes; we are in tents. Three of our rooms were destroyed,” he told Newsweek.

Most of the homes in Upper Chitral’s Darosh area were destroyed and locals claim there are still people buried under rubble. Darwesh Mohammad, a local shopkeeper, lost his entire family in the quake. “My parents, my wife and my son were buried under rubble when our house collapsed during the earthquake,” he told Newsweek. “Our neighbors tried to help me save them, but it was too late.”

Mohammad says no government or military rescue team has reached his town yet, but hopes they will arrive soon. “I have nothing left to live for, but there are so many people here who need help. It’s cold and getting colder. They need shelter.”

Unfortunately, landslides caused by the quake have blocked most roads leading to the remote villages of Chitral preventing aid teams from reaching them. The Pakistan Meteorological Department has also forecast rain and snowfall in Malakand, Hazara, Gilgit-Baltistan, Pakistan-administered Kashmir, Mansehra and Chitral—raising concerns of exposure and further landslides. Just a day before the quake, on Oct. 25, the Kaghan Valley witnessed its earliest recorded snowfall in 40 years, blocking off roads and damaging bridges. It’s only gotten colder since. Pinin Khan from Garam Chashma—a Chitrali village renowned for its hot springs—says it snowed again on Tuesday. “If action is not taken immediately, it will be difficult to survive the winter,” he told Newsweek.

Adding to Chitral’s woes, the earthquake is the second disaster to strike the region in less than three months. In July, flash floods left nearly 100 people dead across Pakistan, and destroyed dozens of homes in Chitral alone. Khan says the villagers have yet to see any compensation for the tragedy. “People wee promised Rs. 500,000 but they haven’t received anything. They have been living in tents this entire time,” he said. “Forget rebuilding homes, Chitral has villages with no hospitals or schools. We don’t even have roads!”

The government, aided by Pakistan’s armed forces, has pledged to ensure everyone affected by the earthquake is provided aid. But with roads blocked by landslides, remote villages such as Roji and Garam Chashma have yet to see any evidence of this. “People are forced to take care of themselves. The government does nothing. The Army does 20 percent, but definitely not 100 percent,” says Khan. “The Aga Khan Foundation’s FOCUS has started work here. They’re the only ones who help,” he adds.

Focus Humanitarian Assistance is an international group of agencies that has been working with the children of Chitral’s fringe villages to develop emergency response teams for natural disaster relief. After July’s floods, it provided one month’s food supplies to a bulk of the most affected communities in Lower and Upper Chitral. But despite their efforts, gaps remain.

Roji village’s Bibi says women rarely get access to NGOs. “Many of our men work in other cities, other provinces… we were alone when the earth below us moved,” she says. But, she added, the biggest concern right now is not waiting for aid or help; it’s just surviving the cold. “You can’t imagine how cold it is.”