Home Latest News War No Option for India and Pakistan

War No Option for India and Pakistan 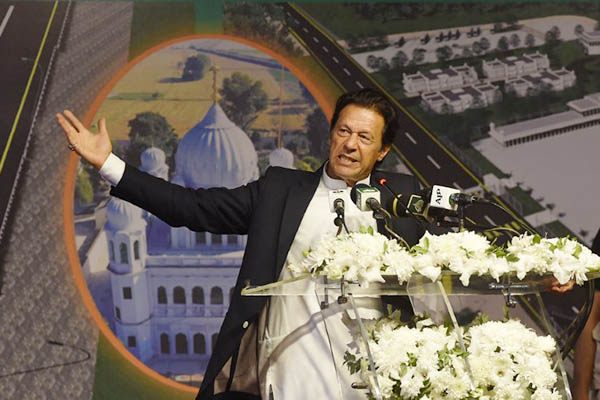 P.M. Imran Khan reiterates promise to New Delhi to take ‘two steps’ for peace for every one from neighboring nation

War is not an option for India and Pakistan, Prime Minister Imran Khan said on Wednesday, adding that “friendship” was the only alternative.

The Pakistani leader was speaking at a ceremony breaking ground on a secure corridor for Sikhs in India to visit a shrine to their religion’s founder in eastern Pakistan. The opening, aimed at strengthening ties between the bitter neighbors, came just days after India marked the 10-year anniversary of the Mumbai terror attacks which left 166 people dead and were carried out by a militant group based in Pakistan.

“We must bury the past,” Khan told Indian and Pakistani officials as well as several thousand Sikhs at the ceremony in Kartarpur, where the mausoleum is located. “Both our countries have atomic weapons. There can’t be war… what alternative is there but friendship?”

“If India takes one step, we will take two,” he added, repeating a message from one of his first speeches as Pakistan’s new leader earlier this year.

The project inaugurated by Khan on Wednesday will see a secure corridor and bridge built between the two countries, leading directly to the grave of Sikhism’s founder Guru Nanak, just four kilometers from the Indian border.

Upon completion of the work, scheduled for November 2019, Indian Sikhs will be able to access the site without first having to apply for a Pakistani visa.

New Delhi had long been asking Islamabad for such a corridor. But realization of the project was prevented by years of diplomatic cold between two countries that have fought three wars since the Partition of the Indian subcontinent in 1947.

The “peace corridor” is “a message of love and fraternity,” said Shah Mehmood Qureshi, the Pakistani foreign minister, adding he saw it as “a precious opportunity between the two countries.”

On Monday, India marked the Mumbai attacks with ceremonies at sites across the city that became battlegrounds in the 2008 violence, which dealt a critical blow to relations between the neighbors.