Home Lightbox Weight on Our Back

Weight on Our Back 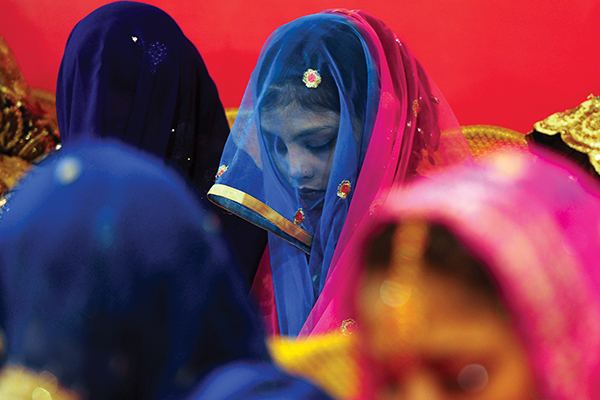 Pakistan’s Council of Islamic Ideology recently declared the Muslim Family Laws Ordinance of 1961 as un-Islamic. Religious leaders would, of course, better serve their community by prioritizing matters more worthy of their calling: the promotion of unity and religious tolerance, unreservedly calling out those who kill in the name of Islam, the application of ijtihad to reform contradictions in and realign “Islamic” law with present-day realities. The Council’s nods to child marriage and polygamy are particularly unfortunate, and they testify that its collective wisdom has scarcely benefited from the rationalist, pro-ijtihad works of poet-philosopher Allama Iqbal.

The universe in Islam’s view, Iqbal wrote, is dynamic, evolutionary and vibrant; and so, too, must be Islamic thought. Iqbal distinguished the eternal principles of religion from its legal code. The legal principles mentioned in the Quran—which were meant for a particular people, time, and place—have immense capacity for expansion and development through intellectual exertion or ijtihad. He wrote The Reconstruction of Religious Thought in Islam (1930) at a time when most Muslim-majority countries had fallen into disrepair, hounded by challenges of development, growth, identity, and comity. But little has changed since.

Pakistan, whose creation Iqbal inspired, lives in an eternal state of confrontation and confusion, where unchallengeable traditions are cited in support of protecting and propounding indoctrination and orthodoxy that have closed hearts and poisoned minds. Iqbal asked: Is the law of Islam capable of evolution? As the Council’s recent judgments demonstrate, this is no longer a rhetorical question. We ignore Iqbal pleas to balance the past, the “weight on the back” of society, with social change and the future at our own risk.

This weight has only grown heavier. At 5.5 million, Pakistan, says a recent report, has the second-highest population of out-of-school children. The Thar famine is a reality check; but here’s another chastening number: some 77 million Pakistanis are food-insecure. Thousands of women, lacking basic health care, die during childbirth each year. And polio vaccination is viewed with lethal suspicion, especially in the northwest. Child marriage is another crisis area: some 24 percent of all brides in Pakistan are under the age of 18, with many of them even younger than 15. The Council should have looked at this last issue within its social context instead of splitting hairs over the definition of puberty to sanctify this evil.

Hina Sagir lives in a small village about 30 kilometers from Gujranwala. Hina had hit puberty but was barely 13 when she was handed over in marriage to her 22-year-old cousin. No one thought to ask her of her opinion. The child was simply pulled from school one day, and the marriage presented to her as a fait accompli. “I felt that my existence was meaningless, I felt I was forgotten, I felt that I was born to be enslaved,” she told me, sobbing. “It was the most horrendous time of my life.”

The Council of Islamic Ideology would clearly view this marriage as halal, but Hina’s life, if it can be called that, has left her scarred. The first three years of her marriage were particularly painful—physically and emotionally. Given her development, she couldn’t carry to term resulting in several miscarriages and stillborn children which led her in-laws to unleash their wrath on her. She sunk into depression; and her husband found refuge in drugs, and in beating her. Today, Hina’s face is heavily lined, and she looks much older than 28.

The story of Rashida Miraj, who lives in a small community outside Khushab, isn’t too different from Hina’s. She was wed at 14 to a distant relative, a perfect stranger to her, who is at least 15 years older. “My identity was expunged, I no longer existed,” she told me of her days as a newlywed. “My opinion and my feelings mattered to no one.” Rashida had wanted to become a schoolteacher. Now a mother of six, Rashida says not having been able to continue her education is the biggest regret of her life. She is struggling to ensure her children at least don’t end up with similar regrets, but her straitened circumstances cannot guarantee that from happening.

The unending nightmare that Hina and Rashida have had to endure is criminally common across Pakistan, where impoverished families see child marriage as both an acceptable means of providing for their daughters and selfishly lessening their own burden—even as it deprives these girls of their childhood, replacing it with the medievalism of domestic brutality. Child brides almost always remain poor with their education aborted, their health endangered, and their emotional growth stunted.

Iqbal yearned to “tear off from Islam the hard crust which has immobilized an essentially dynamic outlook on life, and to rediscover the original verities of freedom, equality, and solidarity with a view to rebuilding our moral, social, and political ideals.” Social evils like child marriage and polygamy have dramatically deleterious consequences that religious dogma and “tradition” attempt so flimsily to mask. One certainly doesn’t need Iqbal or ijtihad to be able to see these stark injustices for what they are. But to challenge Pakistan’s ossified socio-religious oracles, they present a good starting point.

Zafar is the founder and managing director of Kashf Foundation. She lives in Lahore. From our April 5, 2014, issue.

Control population and get education to better life for everyone in Pakistan is the only answer to so called Islamisation.