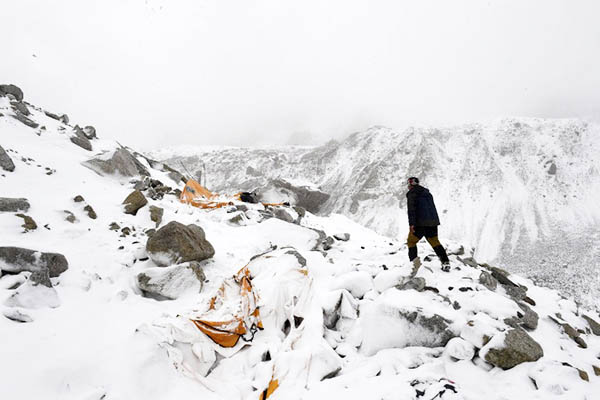 Sherpas in Nepal fear for future as quake stalls tourism economy for second year in a row.

Mount Everest record holder Apa Sherpa ran for his life when a huge earthquake hit Nepal, and now fears for the future after the disaster cut short the climbing season for the second year in a row.

“Everyone here is scared and depressed, we have lost everything,” the climber told AFP by telephone from Thame, deep in the Everest region, one of the villages that is home to the Sherpa ethnic group. The tight-knit community of around 50 families has produced some of the world’s greatest mountaineers, including Sherpa, who is something of a celebrity having reached the top of Everest a record 21 times.

Sherpas, thought to be of Tibetan origin, have a long and proud history of mountaineering, and the term today is used for all Nepalese high-altitude porters and guides assisting climbing expeditions. On April 25, Sherpa was trekking to Thame, where he was born, when the world appeared to crumble before his eyes, as rocks raced down hillsides and buildings turned to rubble.

The 55-year-old U.S.-based climber ran for his life the moment the 7.8-magnitude quake struck, racing to get off a suspension bridge swaying wildly as tremors rippled through the Himalayas. When Sherpa finally arrived in Thame, in eastern Solukhumbu district, two days later, what he found was a nylon wasteland, with everyone living under tarpaulin sheets or tents.

The quake and a powerful aftershock had destroyed the village. “Their jobs are gone, their homes are gone and soon it will start to get cold and windy,” said the climber, nicknamed ‘Super Sherpa’ because of his feats scaling the world’s tallest mountain. “We normally need to wire our roofs to the house foundations for protection against wind—how will we manage this year with just tarps and tents?” he added.

The quake, which left more than 7,800 people dead across Nepal, was the Himalayan nation’s deadliest disaster in over 80 years, and was followed by a 6.9-magnitude aftershock the next day. “That aftershock was like a slap in the face for the villagers, they had just begun to pull themselves together after the quake and then everything unraveled,” U.S. mountaineer David Morton told AFP.

Many in the usually stoic community could not stop weeping for several minutes after the tremors ended, while others screamed in panic and wondered out loud whether they were “cursed by God,” Morton said. The quake triggered an avalanche, which killed 18 people on Everest, leading mountaineering companies to call off their spring expeditions, marking the second year with virtually no summits to the roof of the world.

It was the second tragedy to hit in two years, after an avalanche last year killed 16 Nepalese guides, sparking an unprecedented shutdown of the 8,848-meter high mountain.

Sherpa described the destruction wrought by the quake and subsequent effective cancellation of the climbing season as a “double blow” for the Sherpa community. Morton, executive director of the Juniper Fund charity, which focuses on the welfare of high-altitude workers in Nepal, said the impact of two years with almost no summits would be felt for some time.

“Foreign clients will be reluctant to climb next year… there are concerns about danger, sure, but also cost, after climbers lost all that money over two seasons,” he explained.

Morton, though, expressed hope that the community would eventually recover thanks to a generous and active diaspora. Two charities, the Apa Sherpa Foundation and the Thame Sherpa Heritage Fund are already working to raise money.

The situation facing the region’s trekking porters, many of whom were barely able to eke out a living before disaster struck, is even more dire however. They earn much less to begin with and do not enjoy the support network that sherpas have. The job attracts little respect and offers virtually no opportunities for income growth, exploiting poor teenagers desperate for work with very little chance of breaking into the better paid mountaineering business.

At only 18 years old, Rajkumar Rai is already a veteran of the Everest region’s trekking trails, working in teahouses from the age of nine before starting to carry tourists’ baggage two years ago. Orphaned at the age of five, the teenager carries everything he owns on his back, and said he struggled to get by on a daily wage of just $10.

“Out of 1,000 rupees I earn in a day, I have to spend 600-700 rupees on food alone,” Rai told AFP in the Himalayan town of Namche, a popular stop for climbers and trekkers traveling to Everest Base Camp. “It’s difficult to save anything at all, no matter how many loads I carry,” he said.

The destruction of bridges, footpaths and guesthouses has thrown an already struggling workforce into crisis, according to Ben Ayers, country director of the non-profit dZi Foundation, which has worked in the district for nearly a decade. “Tourism has been the main economic driver for many people who work as waiters, porters, domestic help in teahouses,” Ayers told AFP. “They were earning very little to begin with and, unlike the sherpas, they have a very limited ability to bounce back,” he said.

While the organization attempts to rebuild schools and create new income generation opportunities to relieve the community’s dependence on tourism, Ayers said he expected the region to draw visitors once memories of the quake fade from headlines. “It’s the tallest mountain in the world, it will always attract visitors… the industry will take a hit but people will return in a few years,” he said. “Until then though, we are looking at hunger, disease and suffering for a lot of people.”