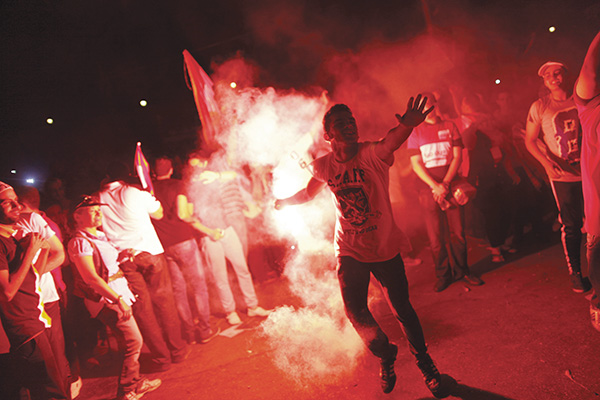 Can the Army keep control?

It may seem a strange moment to leaf through the pages of an old history book. But in a nation that has existed for more than 5,000 years, the past is more than a prologue. In 1830, as it happens, a young imam who had been sent to France by the Ottoman viceroy to learn about the mysteries of the West bore witness to huge, bloody riots in Paris. The mob brought down one king, installed another, and still was not satisfied. (Further riots two years later set the stage for Victor Hugo’s Les Misérables.)

The Muslim scholar from Al-Azhar, Rifa’a al-Tatawi, had never seen anything like it. But as he tried to make sense of the popular revolution, he focused on the word “honor,” which he thought carried the same weight for the French masses as for his Arab compatriots. It implied courage, valor, dignity, and an attachment to personal freedom that made people almost ungovernable. Writing specifically of his compatriots, Tatawi said, “Each holding on to his superiority, no one submits to the other: they are all noble equals.”

So, too, with the upheaval we see in Egypt today. But because such concepts of honor, dignity, and pride are so anachronistic and so insignificant in American political discourse, we find Washington—and even the worldly President Barack Obama—at a loss to understand why the “democracy” that elected the Muslim Brotherhood’s Mohamed Morsi to the Egyptian presidency last year did not give him the “legitimacy” that he claimed scores of time.

The trite dichotomy that Egypt has “democrats who are not liberals” (the Brotherhood) and “liberals who are not democrats” (the huge crowds in the street), propounded most recently in The New York Times, may sound smart at Manhattan cocktail parties, but it doesn’t take us very far into the minds of the Egyptian masses.

The root, the trunk, and the branch of the uprisings that began in early 2011, in fact, is the fight for honor and dignity in the face of governments—whether Hosni Mubarak’s or Morsi’s—that have demanded submission, delivered few or no benefits, and left the Egyptian people feeling humiliated both at home and abroad.

Egyptians like to think of their ancient country as Umm al-Dunya, the mother of the world, not a struggling also-ran in a global economy dependent on demeaning loans from the International Monetary Fund or cynical charity from the Gulf Arabs who, when they come to Egypt, often treat the men as servants and the women as whores.

It may be that no government can solve the fundamental economic problems quickly, but after the revolution began in 2011, any wise government could have instilled a sense of pride and possibility. That is exactly where Morsi failed.

“To the casual observer, it would appear that [Morsi] and the ruling party’s problem was that they had no plan and offered little in the way of real solutions to the major crises facing Egypt: electricity and fuel shortages, a spiraling economy, a lack of security sector reform, rights abuses, and ailing education, healthcare and traffic systems,” wrote Nadine Wahab on the Atlantic Council’s website. The biggest problem, she said, “is that all political leadership, both the members of the ruling party and opposition, have lost the confidence of the majority of Egyptians, leaving no one with the political capital necessary to make the tough decisions.”

Yes, Morsi probably won the elections last year, with just over half the votes (of 22 million cast in a nation of 85 million), but the results were contested, and that case remains in the courts. His “legitimacy,” as he liked to call it, came largely as a result of an accord called the Fairmont agreement, after the hotel where the Brotherhood met with a wide coalition of groups that had opposed the Mubarak regime. They didn’t trust Morsi’s party, which had refused to participate in the Jan. 25, 2011, uprising until it decided to try to take it over. They didn’t like the way the Brotherhood played footsie with Mubarak’s top generals, looking to get itself installed in power. They remembered that the Brotherhood said it would stay out of the presidential race, then dove in with a vengeance. And they knew the organization well enough to be suspicious of its crypto-fascist origins in the 1920s and ’30s, when it modeled its public façade and clandestine action organization on the parties of Mussolini, Stalin, and Hitler. But the Brotherhood was, if nothing else, well organized, and the rest of the opposition, which was not, decided to go along.

Wahab argues that Fairmont, not the elections, was what gave the Brotherhood the image of consensus that imbued it with legitimacy. But in the year since, most of the Fairmont crowd have turned their backs on the Brotherhood, and their supporters have now turned out in the streets.

Instead of installing a government of national unity when he had the chance, Morsi opted to install as many Brotherhood cronies as he could in sensitive posts in the cabinet in Cairo and in the troubled governorates outside. Instead of delivering the openness he promised, Morsi instituted policies that denigrated the fundamentally tolerant Muslim culture of Egypt, replacing it instead with a growing list of fundamentalist rules and regulations.

If Washington and the U.S. Embassy in Cairo had not been so focused on what Americans like to call “the democratic process”—elections and organization—and had paid more attention to the questions of honor and pride that drive the emotions of the Egyptian people and the movements we now see on the street, the Obama administration would not appear, once again, so hopelessly behind the pace of events.

Can the Egyptian armed forces restore to the people that sense of dignity they crave? The old guard, ousted last summer, certainly could not. They looked like a collection of uniformed mummies installed by Mubarak. The current head of the Supreme Council of the Armed Forces, Gen. Abdel Fattah al-Sisi, may be closer to the Brotherhood than many people would like. But his communiqués speak to their feelings. The high command, he said, was ready to die to defend Egypt “against any terrorist, radical, or fool.” There’s no question, really, that he meant its president.