Home Lightbox What to Expect at the World Cup Group Stage

What to Expect at the World Cup Group Stage 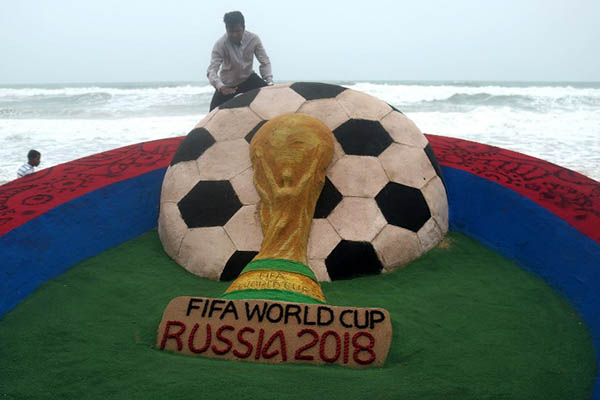 The World Cup group stage will see 48 games crammed into two weeks. A look at the moments to look out for as the tournament kicks off in Russia:

How can anyone miss the opening game at the World Cup? It sets the tone for a month-long festival of football, even if in this case it brings together the two lowest-ranked teams in the competition.

Hosts Russia will walk out onto the pitch at the 80,000-capacity Luzhniki Stadium ranked a lowly 70th in the world, three spots below Group A rivals Saudi Arabia, and without a victory in eight months. However, Russia has spent more than $13 billion on preparations for the big event, and President Vladimir Putin will be eager for the hosts to get off to the best possible start.

In contrast, a defeat against minnows Saudi Arabia would heighten the prospect of Russia becoming just the second host nation to be eliminated in the group stage, after South Africa eight years ago.

The standout fixture in the first round was already this Iberian derby in Sochi before Spain’s sensational decision to sack Julen Lopetegui following the announcement that he would be taking over at Real Madrid after the tournament.

Lopetegui is now set to coach Cristiano Ronaldo at the Santiago Bernabeu next season, but for now “CR7” and the reigning European champions will be looking to take full advantage of the chaos reigning in the Spain camp in this Group B showdown. This is the fourth meeting of the countries at a major tournament in the past 14 years, with the last coming at Euro 2012, when Spain won on penalties in the semi-finals en route to winning the title.

Mohamed Salah has been in the headlines in the past few days thanks to the photograph of him posing with Chechen President Ramzan Kadyrov at the Egyptian team’s base in Grozny. However, Egyptians will be more concerned about Salah’s fitness, with the Liverpool forward battling to be ready for their Group A opener against Uruguay in Yekaterinburg on Friday.

The 25-year-old is recovering from the shoulder injury suffered in a challenge with Sergio Ramos in the Champions League final against Real Madrid, when he was forced off the pitch in tears. Egypt are pinning their hopes on Salah after his prolific season in England, as the Pharaohs prepare for their first appearance at the World Cup since 1990.

The very last group game will be played in the exclave of Kaliningrad on June 28, and it will be worth the wait, as these sides are expected to be competing for top spot in Group G.

The Belgians are ranked third in the world, and Roberto Martinez’s squad contains some of the best players in the Premier League, so there will be no surprises for Gareth Southgate’s England. The English have a talented young squad, and for once expectations at home are not over the top. It will be fascinating to see how they fare against Belgium’s golden generation, led by Eden Hazard, Kevin De Bruyne and Romelu Lukaku.

Will the introduction of Video Assistant Referees cause World Cup chaos, or will it prove to be a welcome addition to the competition?

VAR has been used to varying degrees of success in Serie A and the German Bundesliga, while FIFA used the system at the Confederations Cup in Russia last year and are confident it will help officials on the field. FIFA director of referees Massimo Busacca admits the system has been rushed in for the tournament, but said: “We are ready, we know we must be ready as there can be no experiments here.”

Controversial incidents will be replayed on big screens inside grounds so fans can see why decisions were reached. And, curiously, VAR officials in the Moscow control room will watch games in full kit. “VAR officials sweat with the stress—believe me,” said Pierluigi Collina, chairman of FIFA’s referees committee.