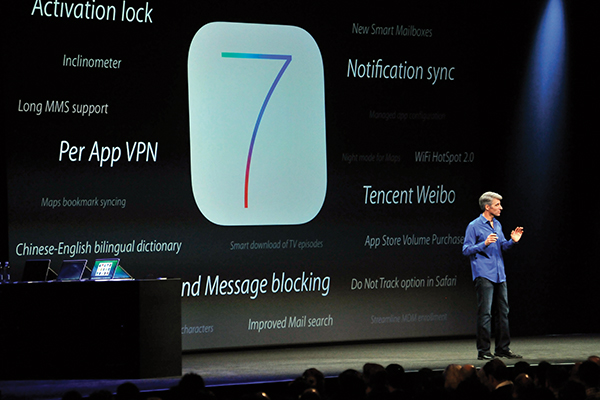 Two-dimensional design is the wave of the future.

If you can remember the days of cassettes, you may be aging out of Apple’s target demographic. At the company’s Worldwide Developers Conference, in its first post-Steve Jobs design overhaul, Apple unveiled its newest operating system, iOS 7: a flat, texture-less interface, unencumbered by the metaphorical three-dimensional design flourishes its visionary leader once touted. What it signaled: Apple is embracing a generation that has come of age using screens and two-dimensional apps.

“There’s going to be lots of people under 20 who soon enough are not going to understand what [these textures] are—and a yellow notepad is not going to make sense, because they grew up on computers,” says Mark Gurman, an Apple enthusiast who writes for the website 9to5Mac and who broke news of the flat design in late April.

Previous iterations of iOS, featuring a veneered Newsstand and wood-and-felt-covered Game Center, have been heavy on imitating a real-to-life look—skeuomorphic, in design parlance, or, to you and me, an attempt to make a feature of the interface mimic its real-life counterpart. The chorus of tech and design bloggers criticizing Apple’s faux look had been growing in recent years, with claims that the tacky visuals detract from what could otherwise be a modern experience and clash with its signature bare-minimum hardware.

The mastermind behind the overhaul is senior vice president of industrial design Jony Ive, a veteran Apple hardware designer who has finally unified the phone’s interior design philosophy with its exterior. “True simplicity is derived from so much more than just the absence of clutter and ornamentation,” he said in a video introduction at the conference. “It’s about bringing order to complexity.” In doing so, Ive has wiped out the skeuomorphic design favored by his predecessor Scott Forstall.

As with all departures from Apple tradition, the first question has to be: “What would Jobs think?” While Jobs had his hands deep in the first-iteration design, he was, above all, a believer in simplicity. And Ive, whom Jobs once referred to as his “spiritual partner,” is proving to be the best person to ensure Apple’s ethos. Sure enough, when iOS 7’s revamped design was revealed, the audience erupted in a standing ovation. Even without its messianic leader, Apple seems to know what you want before you do.